Multidisciplinary Perspective Of An Association Of Five Major Emerging Economies 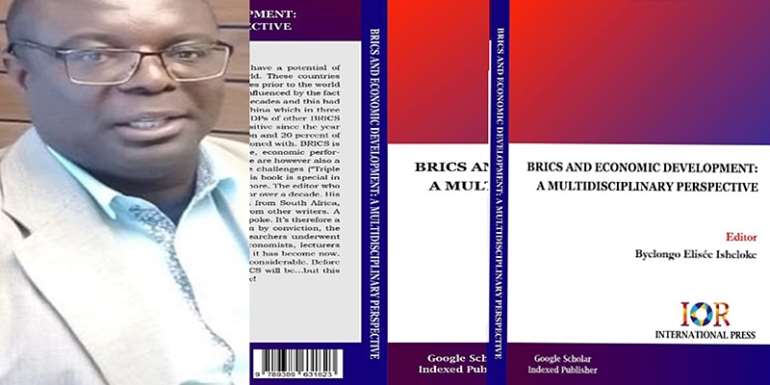 The BRICS, an association of five major emerging economies Brazil, Russia, India, China and South Africa, has a significant influence on regional affairs and is very active on the global stage. All of them are members of the G20. While the group has received both praise and criticism from different corners of the world, BRICS is steadily working towards realizing its set goals, bilateral relations among them are also conducted on the basis of equality and mutual benefits.

In this exclusive interview for IDN, Dr Byelongo Elisée Isheloke, who is currently a Postdoctoral Research Fellow at the University of Cape Town and has scholarly researched some aspects of BRICS for the past ten years, spoke with Kester Kenn Klomegah about his latest book titled “BRICS and Economic Development: A Multidisciplinary Perspective” published in India. Here are the interview excerpts:

Q: What are the driving reasons for writing the book on BRICS?

A: Interestingly, BRICS has opened the door to new academic research opportunities. As an academic, I have written four books but this is the first one devoted entirely to BRICS topic. I have also written a few articles on the BRICS aspects. I have researched on BRICS right from its creation. From day one, I believed that BRICS will shape the economic situation of the World and will have an impact on multilateralism.

The book is well received by academics in South Africa. I hope BRICS experts and researchers will continue debating on burning issues in the book. I still believe that while competition with the World Bank and IMF is inevitable, there still is a level of understanding and cooperation that must be upheld for stability and win-win engagements between the two blocs. Peace and stability in the world also depend on that.

My doctorate studies focused on BRICS interventions in the South African mining sector. I have a background in business studies and have embarked on research on industrial and economic issues for years. As an academic, this has become another research area of specialization. It is a force to reckon with. I wrote the book or rather I co-authored it out of passion and conviction. It is also a research product of many contributors or co-authors. I thank them for working with me in this project.

Q: What important key issues are raised or discussed in book?

A: Important key issues raised include: First and foremost, BRICS is still important today but it faces a number of challenges: trade war, border conflicts, corruption, political issues, corona crisis and other socio-economic problems. Secondly, the current BRICS partnership is not sustainable, from its creation, the BRICS has changed in purpose and priorities. It will continue to change...

The third point here is the idea of BRICS Plus, or additional members to join the BRICS. That was a brilliant one. The organization should not be static. It has never been. Some European countries wanted to join but in vain, Africa is represented in the BRICS but South Africa should be supported. It is my opinion. The relationship between Russia and South Africa as a gateway to the rest of the continent is looked at. It is obvious that the people of Africa need more development than it is the case today.

We raised the issue of knowledge economy as a priority, IT, port economics, BRICS banking effectiveness, language policy and many other issues. BRICS needs to coordinate their collective action towards solving the coronavirus crisis with the rest of the world. A “global” solution is needed, that means a global solution with local implications.

Brazil, Russia, India, China, and South Africa are the important players of the emerging markets in the global economy and their innovation profiles matter for the economic growth of individual countries and the bloc. The purpose of this book is to critically analyze and compare the international rankings in innovation outputs in terms of knowledge and technology outputs among the BRICS countries, in relation, to their economic growth in the last two years.

Using a variety of research conducted separately, this e-book discusses matters of economic substance from African perspective. It identifies the negative scores of the BRICS as a partnership as it is faced with death and seeks to understand its rebirth, restructuring or re-engineering in the aftermath. The study further assesses the strengths of BRICS and advices how to capitalize on these for a steady economic growth going forward. It looks at economic issues affecting the BRICS or its member countries with focus on South Africa.

The issue of language policy in the partneship was not forgotten and possible solutions to language planning issues are proposed. On this aspect, the people of the BRICS member countries should be consulted. The book call for a bottom-up approach in conjunction to the top-down approach that was promoted from the BRICS inception.

Q: What critical challenges do you think still remain and what measures needed in order to realize fully the goals set by BRICS?

A: The BRICS must be open to others, better coordinate, better synergize their actions, democratize their institutions, to promote mineral beneficiation and foreign direct investment. More peace building efforts and do more in creating digital economy. In addition, there will be areas where BRICS will compete, and this is healthy to any economy, but there must be more focus on what BRICS can do together to address abject poverty, growing unemployment and human rights abuses.

It is significant to note that there exist disparity and different strategic orientations of BRICS members. This disparity sometimes influence implementation of decisions arrived at meetings. The book recommends to member countries to streamline individual economic situation in order to strengthen their cooperation. It further encourages frequent interactions and exchange knowledge that is relevant to innovation and economic development. These are just part of the challenges and opportunities for this organization.

A: Starting as BRIC (Brazil, Russia, India and China) the partnership incorporated South Africa in 2010 to form the BRICS. As a partnership, first as a political initiative it takes relatively long to transform into a robust and ambitious economic challenger of the current world order. It takes time to evolve into an economic power bloc. There has been a tremendous achievement in this regard. Although some similarities in development exist, India portrays a slightly high prospect in innovation because of its information communication technology success, followed by Brazil and South Africa.

It is important to point that the size of the population is relevant to the level of development of these countries. In certain circumstances, demographics add to the challenges member countries face, especially in time of Covid-19. One of the key factors is innovation strength in their system of higher education. South Africa needs the utilization of efficient local and global knowledge network in order to deliver the required innovation, and to sustain businesses and to boost economic development.

The major problem of South Africa is that it is not robust economically compared to its BRICS counterparts, and its economy has been performing badly since the 2008/2009 world’s economic crisis. This is why South Africa must be supported by other African countries in the context of BRICS. This is why the idea of an Africa-friendly BRICS Plus is campaigned for. BRICS have to deliver on capital-intensive infrastructure development, and the funding from the New Development Bank (BRICS) is critical in this regard.

With good policies in place, this will help the SADC region and the rest of Africa. It is great that the branch of this bank operates from Johannesburg in South Africa. This is an opportunity for major infrastructure projects to take place in Africa. All the sectors need to come together to solve problems like the Covid-19 pandemic that we are facing today. All the stakeholders, of course, have to work closely together. They need to cooperate with Europe, America and Australasia. The fact is that no one must be left behind.

Q: In all these, can you assess the role of BRICS in Africa's development?

I still hold to the fact that BRICS have to make collective efforts in coordinating with the rest of the world in addressing the coronavirus crisis. Supporting African countries in debt relief efforts would help. A paradigm shift or change in that directions would mean Africa will have more liquidity to inject in economic development. *This interview was originally published in InDepthNews.