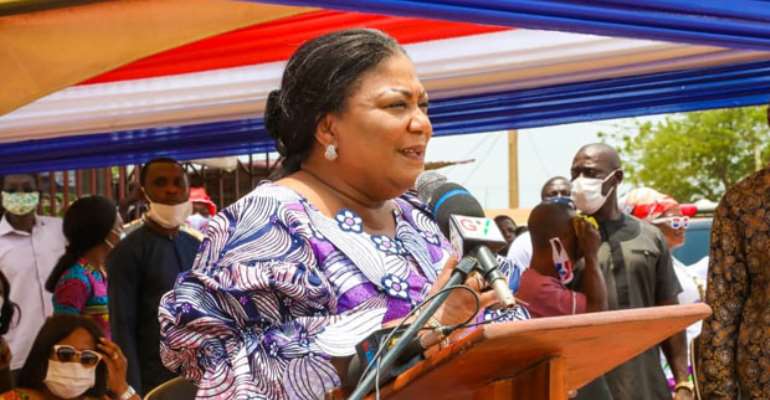 Mrs Akufo-Addo speaking during the tour.

First Lady, Rebecca Akufo-Addo, has taken her tour of the Greater Accra Region to the Weija-Gbawe Constituency, calling on citizens to retain the ruling New Patriotic Party (NPP) in power.

Addressing various gatherings in the Constituency, Mrs. Akufo-Addo said President Akufo-Addo deserves a second term in office to do more for the people of Ghana.

“You are all witnesses to the good works of my husband President Akufo-Addo so come December 7 let us all go to the polling stations and vote for the NPP government,” she said.

She added that the NPP government is determined to continue with its life changing programmes like the Free SHS, and the Planting for Food and Jobs.

“Wherever we go, we should tell everyone that there is the need for four more years for Nana,” she said.

Mrs Akufo-Addo further noted that the NPP government had also undertaken some projects in the Weija-Gbawe Constituency.

The projects, she said, included a constrution of a model Senior High School, and a modern Community-based Health Planning and Service (CHPS) compound with staff accommodation, all of which were ongoing.

She also mentioned the building of a new Kindergarten block in Weija, a new sanitary facility at the Weija Presbyterian School, adding that a motorable steel bridge that would connect Old and New Weija communities would soon commence.

She also pledged Rebecca Foundation’s continuous support for women and children while the health care sector was greatly being supported with medical supplies and other essential services.

She, however, called for unity and peaceful coexistence between the peoples of Weija and Gbawe communities.

He, however, expressed worry over the activities of landgaurds who were allegedly coming from Weija to cause fear and panic in Gbawe and appealed to the state to intervene.

The First Lady and her entourage also visited the Chief of Weija, the Wiaboman community, and the Zongo community in Mallam.

She was accompanied on the tour by the Member of Parliament for the Weija-Gbawe Constituency Tina Gifty Naa Ayele Mensah, and Municipal Chief Executive Officer for the area, Patrick Kwesi Brako Kumor.

What evil men mean for wickedness God turns it around for go...
6 minutes ago

I saw it coming – Ben Ephson on Koku Anyidoho’s expulsion fr...
20 minutes ago