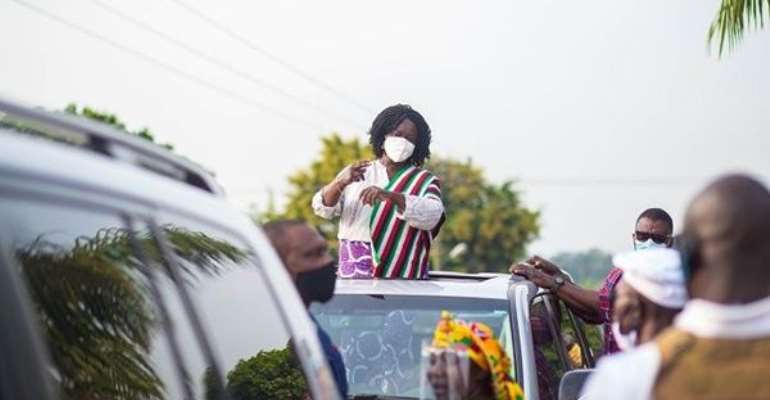 The Vice-Presidential Candidate of the opposition National Democratic Congress (NDC), Professor Jane Naana Opoku-Agyemang, will today embark on a six-day campaign tour of the Central Region.

The Running Mate is visiting the Central Region after successful tours of eight regions where she propagated the NDC’s rescue mission to save the country from further socio-economic deterioration.

As her home region, Prof. Opoku-Agyemang will explain the NDC’s manifesto plans for the advancement of the region which appears to have been neglected for the past four years.

Delighted to visit the region to touch base with the electorate, the Vice Presidential Candidate will among a number

of activities, pay courtesy calls on traditional and religious leaders, and engage various stakeholder groups such as

The areas she will visit for engagements include Komenda-Edina-Eguafo-Abirem, Cape Coast South, Cape Coast

She is being accompanied on the tour by a host of party personalities including Hon. Alex Segbefia, a former Minister for Health and Deputy Campaign Manager of the party for the 2020 elections, Hon. Samuel Okudzeto Ablakwa, a former Deputy Minister for Education and Member of Parliament for North Tongu, Ms Emelia Arthur, a former Deputy Western Regional Minister, Hon. Abu Kasambata, Former Deputy Upper West Regional Minister, Hon. Musa Abdullai, Former DCE for Bawku, Mrs Maame Efua Houadjeto, Deputy National Women's Organiser of the NDC and Mrs Mawuena Trebarh, Spokesperson and Head of Communications for the Office of the NDC Vice-Presidential Candidate.