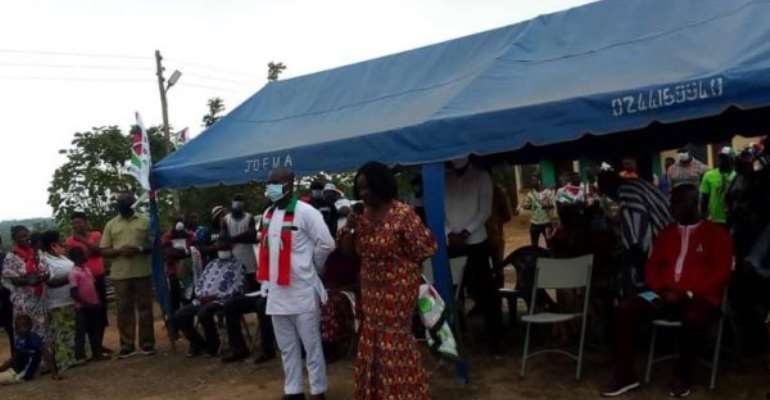 The former Minister for Fisheries and Acqua Culture, Madam Sherry Ayittey has assured fishing communities of the National Democratic Congress (NDC) government's plans to stop the illegal activities of Chinese Industrial Trawlers on the sea.

The move, she said, formed part of measures to abolish the illegal transhipment of fish, otherwise known as "Saiko".

Madam Ayittey was addressing artisanal fishermen, fishmongers and NDC party faithful and sympathizers at Axim as part of a four-day tour of NDC running mate, Professor Naana Jane Opoku-Agyemang to the Western Region.

She said the Chinese Industrial Trawlers were frustrating the efforts of artisanal fishermen to catch fish.

"An NDC government will deal with any form of illegal, unreported, unregulated (IUU) fishing.

Madam Ayittey said the Fisheries sector under the NPP government had experienced unsustainable fishing, culminating in the depletion of the fish stock.

According to the former Minister, the current pre-mix committee would be reviewed to ensure equity in the supply of pre-mix fuel to all fishermen.

Madam Ayittey said the NDC would continue with the distribution of bigger head pans and buckets to fishmongers and outboard motors to fishermen and build more cold stores along the shores.

She said that the closed fishing season would be cancelled.

Prof. Naana Jane Opoku-Agyemang said the NDC government would revive the fish stock by dealing with all forms of IUU.

She called on the NPP government to ensure equity in the supply of pre-mix fuel to all fishermen without any discrimination.

The NDC running mate used the occasion to introduce the NDC Parliamentary candidate for Evaloe-Adjomoro Gwira, Mr Kofi Arko Nokoe to the gathering.

The Western Regional Secretary of the NDC, Mr Joseph Nelson alleged that the Fisheries sector was collapsing as Saiko and other forms of IUU continue to dwindle the fish stock.

Mr Nelson indicated that the free SHS policy is a constitutional provision started by former President Mahama under the progressive senior high school policy and therefore dismissed rumours that Mr Mahama would cancel the free SHS, adding that he will rather make it more vibrant.

The 2015 National Best Fisherman, Mr.Ebenezer Afful appealed to the NDC running mate to invest in fishermen and fishmongers to improve their livelihoods.

JHS graduate appeals for $45,000 to undergo kidney surgery
23 minutes ago