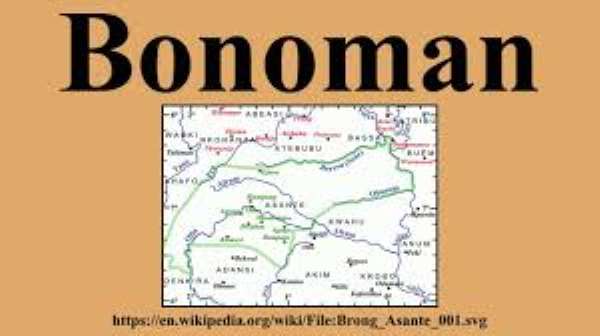 There is this video circulating on social media platforms about people from Bono advocating for the Bono language to be written and taught in our schools, without any address or contact to reach them.

Ideally, as a Bono myself, this campaign is worth pursuing with all our resources in order to stem the near extinction of the Bono language and culture. Sɛ korokyereamansan mma ansua abakɔsɛm twerɛ a, ahayɔ ho abakɔsɛm bɛbɔ Agya Bɔfoɔ abaso abere biara.

But, it's not just about writing the Bono language. There's more to it.

First, we have to get a board /committee mix of all the diverse Bono dialects, ie: Jaman Bono, Berekum Bono, Techiman Bono, Atebubu Bono, Dormaa Bono, Wenchi Bono, Nkoranza Bono, Sunyani Bono .....all the different dictions of the Bono language.

Secondly, or most importantly: the Bono culture, our traditions and customs, rather should be first written uniformly as in history, in fiction, drama, comedy, poems. .... and be distributed to the school going ages in all Bonoland, and subsequently be taught in our schools after meeting Ghana Education Service's approval procedures. What teachers in Bono schools teach now is more of the Akuapem, Fante and the Asante culture. Meanwhile, we the Bonos are the firstborn (piesie ) of the Akans in Ghana. It was from Bonoland that Asantes migrated to settle under the Kum Tree, hence Kumasi (under the Kum Tree). It was from Bononkyɛmpem that Obunumankoma, Osono and Adapagyan led the Fantes to settle at Mankesim.

Those advocating for the writing of the Bono language should rather think of putting in place the above suggestions, instead of the: "me support, me support" a bɛɛkeka wɔ wiase ntentan kɛseɛ (internet) so ke.

Can you imagine, that, even the Akuapem, Fante and Asante Twi that had been written since God knows for how long is not a uniformed language that is translatable into other international languages on Google as it's in Hausa, Swahili and Afrikaans?

The Akan traditional rulers are sleeping on their jobs. They're gradually allowing our Akan heritage to be swallowed up by the vestiges of colonialism.

True son's of Akan, we've got to rise up and fight for our today's and tomorrow's history.

After all, the great Nana Adinkrah of yore, famed for writing the Adinkrah symbols, the Gye Nyame symbols, was a Bono, from Suma Ahenkuro. We the Goka people, my nativity, are the Adontenhene, Chief Warriors of the Suma stool.

I've written a lot about this in my publications.

The Bono people always enjoy reading my stories, but they've never cared to carry it on in implementing those suggestions in there.

Ending this year, or early next year, if things work as planned, my fiction titled: "Wopɛsɛ Wadaeɛso Ba Mu A Hwɛ Wanoso Yie" will be read on the Radio BAR's Tie Bi programme, on Thursday evenings - 19:00 - 20:00.

It's purely a Bono culture fictionalised.

I finance these solely. I'd needed investors who'll even think of getting the works printed for the Bono students. Sɛ ɔtwee ankɔ adwabɔ ase a, ne nwoma kɔ. I am a writer, and with the support of the indigenous Bonos, we can put the betters of Bono on the world map in yonder.

Manasseh Azure writes: What happened to Bridget Otoo at Metr...
22 minutes ago