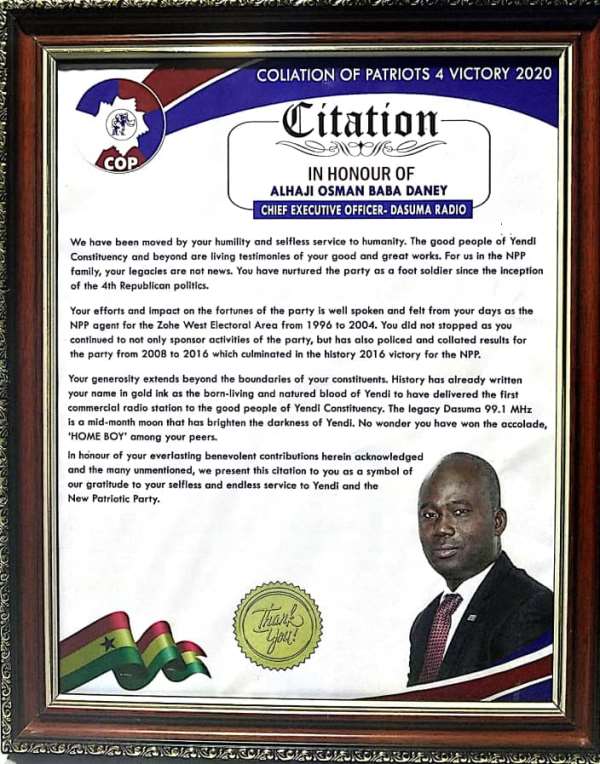 A pro-NPP youth group known as Coalition of Patriots 4 Victory based in Yendi has recognized and honored Alhaj Baba Osman Daney for his exceptional leadership qualities and contribution to the development of the NPP.

Alhaj Baba Osman Daney is the Chief Executive Officer of the First Commercial Radio Station (Dasuma Radio) in the entire Eastern Corridor Enclave and also a former aspirant in the last NPP parliamentary primaries is noted for his generosity, selflessness and commitment to the course of the New Patriotic Party and the general well-being of the people.

He has served in different capacities with distinction within the party since 1996 to date. His roles as NPP agent at Zohe West Electoral Area from 1996 - 2004, policing and collation of results in 2016 culminating in NPP's victory as well as financing activities of the party, deserve recognition.

Coalition of Patriots 4 Victory is noted for several initiatives aimed at fostering unity and cohesion of the party as well as grassroots mobilisation for NPP's victory.

They recently organised a unity conference to bring all aspirants in the last primaries together where they pledged their support for the parliamentary candidate.

Alhaj Baba Osman Daney noted for his generosity and initiatives as a true grassroots person, is seen as a key figure in delivering a victory for the NPP.

This was in recognition of his efforts at developing Yendi Constituency through a number of developmental activities and businesses which employed a lot of youth, was presented with a citation.

We have been moved by your humility and selfless service to humanity. The good people of Yendi Constituency and beyond are living testimonies of your good and great works. For us in the NPP family, your legacies are not news. You nurtured the party as a foot soldier since the inception of the 4th Republican politics.

Your efforts and impact on the fortunes of the party is well-spoken and felt from your days as the NPP agent for the Zohe West Electoral Area from 1996 to 2004. You did not stop as you continued to not only sponsor activities of the party but has also policed and collated results for the party from 2008 to 2016 which culminated in the history 2016 victory for the NPP.

Your generosity extends beyond the boundaries of your constituents. History has already written your name in gold ink as the born-living and natured blood of Yendi to have delivered the first commercial radio station to the good of Yendi Constituency. The legacy Dasuma 99.1mhz is a mid-month moon that has brighten the darkness of Yendi. No wonder you have won the accolade 'HOME BOY' among your peers.

In honor of your everlasting benevolent contributions herein acknowledged and the many unmentioned, we present this citation to you as a symbol of our gratitude to your selfless and endless service to Yendi and the New Patriotic Party."