By Tammy Hodgskiss - The Conversation 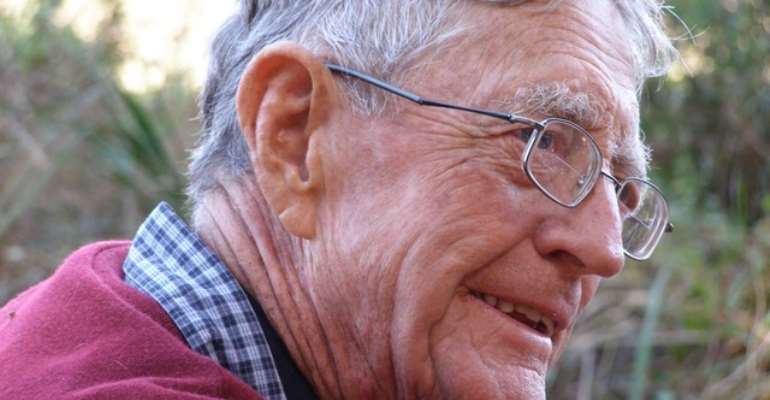 I had the honour of learning more about Mason – the man and the archaeologist – in February 2019 when the Origins Centre at the University of the Witwatersrand (Wits) in Johannesburg hosted an exhibition that celebrated his immense contribution to southern African archaeology. It's hard to believe that the enthusiastic, sharp and able man with an incredible memory and deep knowledge is no longer with us.

Mason was born on 10 February 1929. He grew up in Saxonwold, Johannesburg, and attended St John's College, from which he matriculated in 1946. He studied a B.Com at Wits and excelled, receiving numerous accolades and awards. But a different path awaited him.

After attending a lecture by world famous anatomist Professor Raymond Dart a young Revil Mason became fascinated by archaeology and went to the University of Cape Town to study the subject. Again, he was an excellent student and went on to obtain his doctorate in archaeology in 1957, when he was 28. He worked for the country's Archaeological Survey until he took an archaeological position at Wits in the 1960s.

The institution became Mason's academic home for the rest of his working life. He became a professor, and in 1976 was appointed as the founding director of the Archaeological Research Unit. It was a post he held until his retirement in 1989. With the unit, he launched an extensive survey and excavation programme and was instrumental in laying the foundation for the practice of archaeology in South Africa.

Together with colleagues, he excavated numerous Early, Middle and Later Stone Age (hunter-gatherer) sites dating back to almost 2.6 million years, as well as agriculturalist and herder (Iron Age and historic) sites, mostly around the Gauteng and North West provinces. Among them were Makapansgat, Cave of Hearths, Sterkfontein, Olieboomspoort, Kalkbank, Munro, Uitkomst, Melville Koppies, the Kruger Cave (later called the Mohale Cave) and Broederstroom. Revil Mason (centre) with fellow members of the Wits Archaeology Research Unit Tom Maubane (left) and Lewis Matileya at Zambok, a site discovered by Maubane near Haartebeest Poort. Supplied

Mason introduced and demonstrated the value of various analytical methods into the field of archaeology. Under his directorship, the Archaeological Research Unit undertook smelting furnace experiments, to better understand the furnaces found at Melville Koppies and Lonehill – some of which are still there today. He also saw the value of aerial photography in discovering and recording archaeological sites; by combining this with many hours of excavating, he mapped the Herder (Iron Age) archaeology of the entire North West and Gauteng provinces.

He published numerous papers and books, which are still read and used today. His books included Cave of Hearths (1988), Origins of Black People of Johannesburg Area (1987), and South African Archaeology 1922-1988 (1989).

This fitted with his then progressive ideas about the importance of making all South Africans aware of the country's archaeological past. During the 1980s historians and archaeologists began to challenge the fallacy of European colonial myths perpetuated in the school history curriculum. Mason tirelessly sought to convince officials of the need to recognise and celebrate the African past, and the role that African people played in the making of modern South African society. He welcomed school groups to visit the sites he was excavating, and worked with teachers to develop programmes to help learners understand how people lived in South Africa in the last 2,000 years.

With his colleagues, Mason investigated the beautiful rock engravings in the Magaliesberg near Johannesburg, which are now curated by the Rock Art Research Institute at Wits and some of which are on display at Origins Centre.

At the age of 25, Mason climbed the Brandberg mountains in Namibia looking for rock art made by the indigenous San people. He discovered what he called “the Brandberg Picasso”, an abstract San rock art image, and documented a San rock art site on top of the Brandberg in a cave now known as Mason shelter. Together with revered artist Judith Menger (whom he married in 1957), the sites were meticulously traced and, later, beautiful replica paintings were made. A young Revil Mason surveying for Professor C. Van Riet Louw.

He didn't just climb for work. Mason was a keen explorer and mountaineer. He explored Kaokoland and the Brandberg in Namibia, the Ruwenzori in Uganda, and other African mountains. He hiked the great Asian mountains, climbed the ice mountains in Russia and the Pamirs in Central Asia. He cycled down North America from Canada to Mexico, and at the age of 69 went on a solo bike trip across the Karakoram Mountains, in the western Himalayas, from Pakistan to China.

Mason, who is survived by two daughters, Tamar and Petra Mason, and two grandchildren – was a driven yet humble and down to earth man. He lived his life simply, often preferring to cook food on an open fire: in fact, his braai grid was on display at the Origins Centre's exhibition.

He will be sorely missed. But he will not be forgotten: Revil John Mason has left an incredible legacy and has inspired many to become (better) archaeologists, instilling a passion for exploring the real African history. His contribution to archaeology and towards an accurate understanding of South African history is immeasurable.

Tammy Hodgskiss does not work for, consult, own shares in or receive funding from any company or organisation that would benefit from this article, and has disclosed no relevant affiliations beyond their academic appointment.

By Tammy Hodgskiss, Curator at the Origins Centre Museum, University of the Witwatersrand

Some MMDCEs will be approved in December because of controve...
45 minutes ago