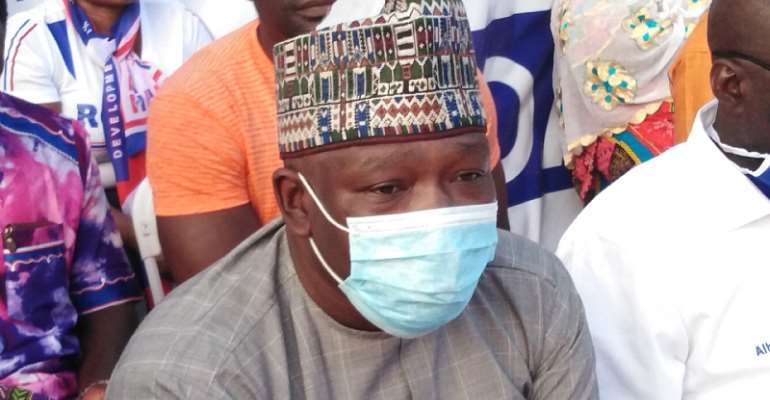 The National Nasara Coordinator for the ruling New Patriotic Party (NPP) Mr Abdul Aziz Futa has described President Akufo Addo love for Zongos as the best ever in the history of this country.

Mr Aziz Futa said since Ghana's independence there had never been any President that has the Zongos at heart than the current President.

Mr Futa made these observations during the inauguration of the Ayawaso North Constituency Campaign Committee for election 2020 at Mamobi, a suburb of Accra.

He noted that, in only three and a half years in office, the NPP government has undertaken about 406 projects in the Zongos.

He mentioned the creation of the Ministry of Zongo and Inner Cities Development and the Zongo Development Fund as some of the best initiatives the President has introduced for the people of the Zongos.

He pointed out that there's no Zongo in Ghana that has not benefitted from the flagship programs introduced by the NPP government.

NABCO, 1D1F, One District One Ambulance, Free SHS, Astro turfs, infrastructure, paying monthly salaries of Muslim teachers in the Islamic schools (Makaranta) among others are some programmes implemented by the NPP government that is benefiting the people including those from the Zongos.

The Akufo Addo government has also restored allowances for Muslim teachers in all the Islamic schools nationwide, established schools, ICT blocks and other infrastructural developmental projects for the people of the Zongos.

He revealed that the Mamobi General Hospital has through the Zongo Ministry benefitted from some face-lift projects that included the installation of elevators/lift to make movement from the ground to other floors less stressful.

He among other things also mentioned that it is only the NPP that has ever given a Zongo indigenes the highest post of a Vice President on two different occasions.

The Nasara Boss was very optimistic the people of Ayawaso North will vote massively for Nana Akufo-Addo and Alhaji Manaf in the forthcoming polls in December taking into account the numerous projects in the Zongo communities.

For the first time, Mr Aziz Futa declares that the NPP is winning both the Presidential and Parliamentary elections in the Ayawaso North Constituency.

I can’t blame my visa denial to Netherlands on anti-LGBTQ+ a...
15 minutes ago