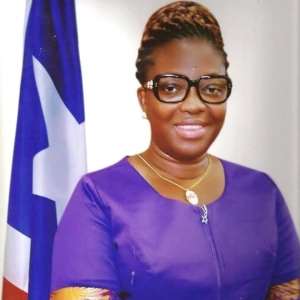 The Ministry of Gender, Children and Social Protection is saddened by reports of undue force used by the Liberia National Police (LNP) in handling Anti-rape protesters in Monrovia.

Recognizing the rights of the protesters to seek justice for survivors and victims of rape at all times, upon receiving news of the situation, Minister Williametta Saydee Tarr got directly engaged with the Justice Minister F. Musah Dean, to request he ensures that the Police exercise restraint and avoid the use of force against the protesters.

Minister Tarr applauds the frantic effort by Minister Dean and the LNP for the exercise of restraint and restoring calm.

The Gender Boss believes that the intent of the protest is genuine and was very happy to join them on their first day, where she and her entire leadership team, was able to interact with them and thank them for coming out to raise the awareness.

Gender beseeches the LNP to continue to exercise professionalism in handling civil disobedience, particularly when dealing with women and children, and in this instance anti-rape campaigners. Rape is a menace to society that all of us need to join hands together against in order to eradicate it from within our communities, and the intent of the protest was to raise this very needed point.

The Ministry commends the resilience of the anti-rape campaigners in sustaining a three-day-long peaceful march aimed at curbing sexual and gender-based violence especially rape from our society. This is especially important at a time when the GoL’s Inter-Ministerial Taskforce on SGBV has completed and submitted the Comprehensive Anti-SGBV RoadMap as mandated by His Excellency President George Weah.

In the same vein, the Ministry frowns on all who sought to hijack the protest against rape, for political aggrandizement, condemns the incitement of violence and asks that all Liberians actually join in the fight against the perpetrators of this heinous crime and join us in pushing for the amendments of the pertinent laws, including amending for stronger grading and punishments, and for the Judiciary to work on behalf of survivors and their families.

The Ministry takes this time to urge protesters in this campaign against rape to maintain the peaceful nature of the protest.

'It's Ridiculous, I’ve To Be Dealing With This Group Since 2...
45 minutes ago