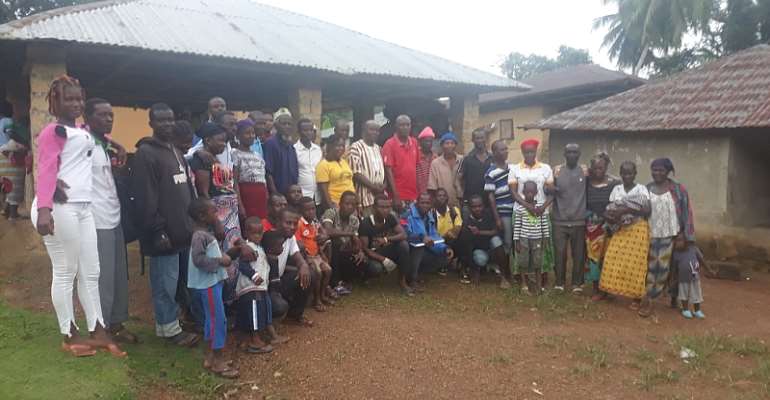 Charcoal burners with NACUL President and Supt. Moore at the meeting in Borjeh Town

Suehn/Mecca District Charcoal Producers Association is one of the 17 charcoal producer and seller networks under the National Charcoal Union of Liberia (NACUL).

The charcoal producers made the disclosure on Thursday, August 20, 2020, during a meeting with NACUL’s President, Mr. Richard T. A. Dorbor, in Borjeh Town, Suehn/Mecca District, Bomi County.

Gibson and Taylor appealed for relevant international partners to assist them through NACUL for such a legendary project in the charcoal industry, saying, “We are getting positive responses from local leaders and residents because reforestation has become important when many of us depend on burning coal for livelihood.”

According to them, the idea to plant trees was acquired by series of trainings conducted by the mother organization, NACUL, which has identified four pillars in promoting sustainable charcoal production and sustainability of the Liberian forest. The pillars include: (1) Tree Planting, (2) Improved Production Technology, (3) Alternative Sources of Production and (4) Efficient Use of Charcoal.

The charcoal producers spoke of the need for training on how to plant trees and what kind of trees to plant.

“Thanks to Mr. Dorbor for coming to see and hear what we are doing and we are planning to do here. We are appealing to NACUL and partners to help us undertake this project by training us on how to plant trees and what kind of tree to plant,” they indicated, saying that it is a new thing to the area.

After attending several training programs from NACUL, Gibson and Taylor revealed that they have organized themselves to carry out production in group. Under the theme: “There is strength in unity,” the charcoal group officials also said they continue to bring more members on board because there are many coal burners in the District.

“While we take the waste woods from farmers to burn coal, we are aware of the result of cutting down tree which is contributing to climate change due to deforestation and land degradation,” they pointed out.

In preparation for their group work, the Suehn/Mecca District Charcoal Producers Association has planted rice and cassava on a 6-hectare of land (15 acres) to alleviate the food difficulty they face during production and other works.

“Mr. Dorbor, we have developed a farmland of six hectares with rice and cassava. We will use the rice and cassava during our work. This is also intended for us to produce our coal in peace and without the control of buyers because they provide us food before production. With this, we cannot rush to sell coal and it will avoid the devaluation of our coal,” Suehn/Mecca District Charcoal Producers Association Chairman Mr. Siaffa G. Gibson maintained.

Also speaking, the Town Chief of Borjeh Town, Mr. George Bush Carter, expressed the community’s happiness over the charcoal burners’ plans to plant trees, and confirmed ongoing discussions about land for the project. He promised that they will do everything possible to secure the land.

While residents embrace the plan and are willing to work with the charcoal group, Town Chief Carter and elders of the area said they are carefully and properly negotiating with land owners to avoid future embarrassments, most especially land disputes. They, however, assured of acquiring the land because reforestation has become paramount due to benefits they get from the forest.

Interestingly, Suehn/Mecca Statutory District Superintendent, Rev. Marvin E. Moore, who is also a charcoal burner, attended the meeting and reaffirmed his support to the group’s plan to plant trees.

For his part, NACUL President Richard T. A. Dorbor, lauded the efforts of the charcoal burners for inviting him to their area to see and hear what they are doing and about to do.

Dorbor could not hold back his impression for members of the Suehn/Mecca District Charcoal Producers Association to take the lead in tree planting which is a major pillar of NACUL as part of its efforts in sustainable charcoal production and forest management.

He urged the charcoal producers to do everything in unity if their dream of tree planting must become a reality, adding, “There is strength in unity, so you people should come together as a group to carry out the project.”

Dorbor joined the charcoal burners in appealing to the community the Superintendent for land that will void of conflict. He said, in sustainable charcoal production, land is the cardinal component which must be given keen attention.

He also informed the residents that there is a land committee which NACUL is part of, explaining that the committee is responsible to settle issues arising from land.

“The availability of land is cardinal to sustainable charcoal production. When we talk about tree planting, you need land to plant the tree. The only thing that I want you people to do as a community, if you have any issue with anybody that comes to land issue that you are not satisfied with it, write, people sign, submit it to the office of the National Charcoal Union of Liberia,” he said.

According to him, they will onward submit that document to the committee to tell them that there is a serious issue in the area where charcoal associations are. He continued: “And we have strong people; we have Rice and Rights Foundation-the group that came here and conducted training on tree planting and livelihood. We have SDI-Sustainable Development Initiative, and so many and we also carry out advocacy on the land issue-land conflict, land resolution when there is land problem, so we are partnering with the Liberia Land Authority, through this committee.”

To avoid conflicts, Dorbor told the charcoal burners to ensure that a memorandum of understanding be reached in acquiring the land. He further told them to inform NACUL in any given situation as they go about their plans to plant tree, reaffirming the Union’s support to the project.

Following the meeting, the Suehn/Mecca District charcoal producers took President Dorbor on a tour of their rice farm near Borjeh Town.