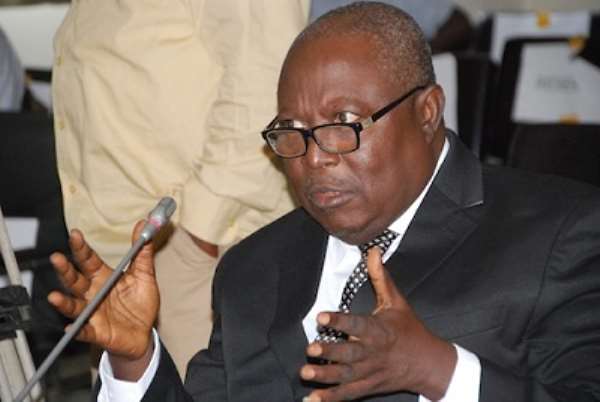 Special Prosecutor has reviewed portions of Kwamena Ahwoi’s “Working with Rawlings” material, critiquing aspects of the book which he described as untruths.

“…the uninvited copy of the autographed book was the real bait to get me to read the book, Amidu said in an epistle titled “KWAMENA AHWOI’S WORKING WITH RAWLINGS – AMIDU’S CRITIQUE (Part 1)”

He noted:”I served under the same regimes as a ministerial appointee and longer than the author served, played critical roles in them, lived them, kept some records of my observations and lived experiences. I can and will, therefore, contest some of the author’s or authors’ shoddy and unscholarly reported outcomes.”

His remarks follow the comments made by former President JJ Rawlings who had maintained Professor Kwamena Ahwoi’s controversial book – Working with Rawlings is a deliberate ploy to take over the opposition NDC, if the Flagbearer losses the 2020 polls.

The book catalogues the academician’s accounts of his days as an appointee and close associate of the former military leader under the PNDC administration.

However, some of the claims in the book have been challenged by the former military leader and some former appointees of the erstwhile NDC government.

He suspects there is a grand scheme by Ahwoi to consolidate his control in the NDC beyond 2020 insisting the timing of the launch of Professor Ahwoi’s controversial book – Working with Rawlings – is deliberate.

In a tweet Mr. Rawlings said:” People like him do not expect the NPP to let go off 2020, so they are hoping to utilize the opportunity of a loss, to damage Rawlings with some vicious, manufactured stuff.”

Below is the full Statement

I have avoided reading books written by my former colleagues reporting on their observations or experiences in the Governments I served with them lest some contents in the books put temptation in my path to attempt a rejoinder or critique of the book and earn the displeasure of such a colleague.

I did not, therefore, intend to look for let alone to read, my vandal-mate, Mr. Kwamena Ahwoi’s Working with Rawlings. But fate is cruel. An autographed copy of the book was left at the gate of my residence on Sunday, 2nd August 2020 by a former associate during the PNDC Government, a former functional executive committee member of the NDC and Government appointee of the NDC Government from 2009 to 2016. Word was left alongside the book that, portions of it narrates on the authority of rumours, if ever rumours now constitute a source of authority for “Professors”, that the late Mr. Paa Kwasi Amissah-Arthur and I were members of the National Reform Movement. I was identified and baited by the author and Mr. Kofi Totobi-Kwakye, then the Minister for National Security, with the Vice Presidential candidacy in the 2000 election to breach the ranks of the movement. I am reported to have excitedly swallowed the bait. The narrative is an irredeemable lie because I can say and prove authoritatively in due course that neither the late Mr. Amissah-Arthur nor I was an associate or member of the National Reform Movement.

With hindsight, the uninvited copy of the autographed book was the real bait to get me to read the book, so I may as usual be tempted to refute and expose its subjectivity, figments of imagination, delusions, and breaches of all the ethics of acceptable standards of scholarly research, and report writing. I have always hated laziness in any professional work not to talk of the work of persons who hold themselves out as scholars, academics or mainstream professionals subjected to disciplinary proceedings by their professions for unethical products. Baiting me with Working with Rawlings is the real bait of the author I have willingly and knowingly decided to swallow like a fish to give rise to this exposition and critique. I served under the same regimes as a ministerial appointee and longer than the author served, played critical roles in them, lived them, kept some records of my observations and lived experiences. I can and will, therefore, contest some of the author’s or authors’ shoddy and unscholarly reported outcomes.

I have read Mr. Kwamena Ahwoi’s Working with Rawlings. I came away with the conviction that Mr. Kwamena Ahwoi may have presented himself as the primary author but others who are acknowledged and referred to in the book as knowing and living the same observations and experiences the primary author narrates, played the role of co-authors, editors and reviewers of the book. The author and/or co-authors claim the primary author is a scholar and a legal luminary. The author and his collaborative authors have thus set themselves to be judged by the high standard obtainable in the professions they profess to belong to. Any scholar or professional worth the name must be learned in the philosophy and methods of research including its ethics in his or her chosen field or the discipline he or she holds out himself or herself to be competent in.

For instance in the foreword to the book which is normally not an integral part of the book the reader is told by one Naana J. Opoku-Agyemang, PhD/FGA that:

“Written in clear, engaging prose, the writer invites the reader to receive the content of the narrative honestly delivered. The vivid, engaging and deeply reflective eye witness account couched in unencumbered prose, brings to the fore events narrated with open honesty and transparency.

The first person narrative perspective releases the reader from the potentially uncomfortable position of an intruder to that of a trusted addressee. This is especially so as the text grounds its content in verifiable fact, at times seeking and receiving the approval of non-fictive persons.” (Italics supplied)

Whilst the foreword is normally not an integral part of the book, no ethical academic will ever write a foreword to a scholarly book without first reading the book to make an objective assessment of its veracity because the writer of the foreword knows the invitation to write the foreword was based on the intention to use his or her reputation to entice the public to invest financial and human resources in purchasing and reading it. In this instance, the writer of the foreword is marketing the book with her credentials of PhD/FGA and has an ethical obligation to the public for integrity and truth in what she says with her credentials in the foreword.

Did the writer of the foreword play any significant role as an editor, a reviewer, and an institutional colleague of the primary author in his narratives and writing or authoring of the book such that by the ethics of scholarly and professional writing she or he should not ethically have written the foreword to the book? Did she or he conceal those facts which make for an accountable and transparent ethical foreword writing in her foreword to the book?

This same ethical standard applies to collaborators and consultants to the book who have been held out as substantially contributing to the book, reviewing, and editing it. For instance, is it ethical for a judge of the superior court of justice before whom the author alleges he appeared as a witness for one of the parties to a case participate in writing the book as a reviewer and/or editor of a book in which his decision as a judge has been patently twisted and presented as verifiable fact without the learned justice asking the author or co-author to expunge that manifestly false portion of the narrative from the book before it was published? How ethical can a contract signed on 4th December 1997 be attributed by a scholar author(s) to an Ishmael Ayittey when the judge reviewer and/or editor of the book had concluded ex cathedra in a reported judgment that it was Nat Amateifio who signed the contract?

Is it also ethical for professional lawyers and a Justice of the Superior Court to be consultants, reviewers and/or editors of a book in which they are unable to tell the Sir Cecil John Rhodes Scholar and author that Mr. Justice P. E. N. K. Archer was the Chief Justice of Ghana on 7th January 1993 and not Mr. Justice I. K. Abban who became Chief Justice on 22nd February 1995 after Mr. Justice P. E. N. K. Archer retired the previous day? A serving Justice of the Superior Court of Ghana and reviewer of the book who does not know who his Chief Justice was on 7th January 1993! To cap it all, the author who holds himself out as a professor, a governance and local government specialist has not yet mastered in his teaching career how to just pick up the Ghana Law Reports reporting 1993 cases to confirm for himself and his consultants, reviewers and/ or editors who was the Chief Justice of Ghana at a particular time in Ghanaian history such as the date of the coming into force of the very important 1992 Fourth Republican Constitution he professes to know and write about with pretentious scholarly erudition! Oh, even a simple Google search would have revealed it! Are Chief Justices Archer, and Abban not by now turning in their graves at this scandal of scholarship and judicial conduct exhibited in Working with Rawlings?

This is the book which the equally portrayed distinguished scholar Naana J. Opoku-Agyemang, PhD/FGA has put her reputation and integrity on the line to the whole world in the foreword when she stated that it is: “Written in clear, engaging prose, the writer invites the reader to receive the content of the narrative honestly delivered. The vivid, engaging and deeply reflective eye witness account couched in unencumbered prose, brings to the fore events narrated with open honesty and transparency.” (Emphasis supplied).

But wait until we get to examining how she could ethically have collaborated with the author and others to doctor an interview on Radio Gold with the President Emeritus, H. E., Flt Lt. J. J. Rawlings, to the public in 1996 which has shamefully been narrated in the book as a hallmark of integrity.

The person who brought the autographed copy of the book to my residence has brought me trouble and he knew that by my nature I will not shy away from an honest challenge when professional ethics of any profession is at stake. I have taken up the challenge: and time and the pressure of my already onerous work schedule permitting, I intend to deal with the foregoing issues and more in a series of presentations.

I intended to be guided in my presentations by the hallowed ethics of accountable and transparent writing which requires a professional or academic of any hue who writes very serious discourse for public education, guidance and consumption to disclose everything which the public must take into account in assessing the veracity of his work. My next presentation will, therefore, state any biases and any conflicts of interest my presentation may be tainted with to bring myself within the acceptable ethical standards empowering me to critique the author’s book. I shall be using my observations as a participant and my experiential learning therefrom spanning the period the author narrates as my background knowledge base in the exposition and critique I will be making. I will as far as practicable use the qualitative method of social research, analysis and reporting to arrive at my conclusions in my critique of Working with Rawlings.

It is important for everybody to take notice and I hereby serve notice that I do not lay any claims to being a scholar or an academic. I am not so self-conceited as to claim any intelligence or intellectual standing in society and I need none to function as any Ghanaian trying to live an honest life.