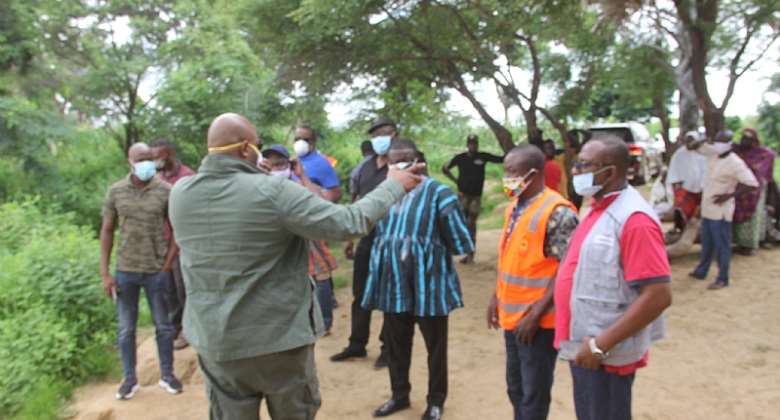 Mr. Eric Nana Agyemang- Prempeh, the National Director of the National Disaster Management Organization (NADMO), has called on people living near the banks of the black and white Volta Rivers to move to higher grounds.

Mr Eric Nana Agyemang-Prempeh made this call when he and his officers visited the confluence of the two dams, Bagre and Kupeinga at Galaka in Sapelliga in the Bawku West District of the Upper East Region.

He indicated that they have been receiving daily updates from the Burkinabe authorities and that the dam is due for spillage anytime soon.

According to NADMO, the spillage is due to the rate of rising water levels of the two dams.

The spillover of the Bagre Dam in neighbouring Burkina Faso and Kupeinga in Togo are intensifying.

Mr Eric Nana Agyemang-Prempeh said it was important the spillover may cover about two miles from the banks of the rivers and residents within that zone may be affected.

He added that large farms near the dam in Burkina Faso have been destroyed and many residents in those parts displaced.

Nana Agyemang-Prempeh said, the spillage of the Bagre dam has been a ritual often to prevent the dam from breaking.

He stressed that the construction of the Kpawlugu multipurpose dam when completed would solve about 70% of the problems.

He noted that alot has been done on drainage by the ministry of works and housing and, ministry of sanitation and water resources by desilting the volta river whixh will help when the Bagre dam is spilt.

Ayendago Sumaila, a resident at Sapelliga said, they are however ready to move.

Yakubu Adama, another resident also called on government to come to their aid if the spillage destroys their crops.

Mankessim: Kenkey seller knocked down by a speeding vehicle ...
29 minutes ago