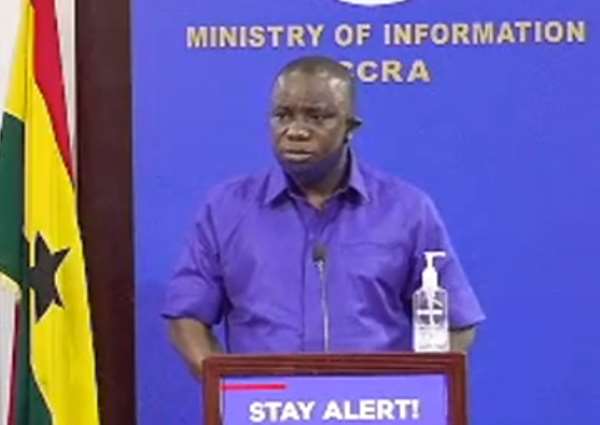 The Minister for Defence, Dominic Nitiwul has lambasted the Minority side in Parliament for asking government to withdraw military personnel deployed to the country’s border towns.

The Volta Caucus on the Minority side earlier in a press briefing gave the government a 24-hour ultimatum to withdraw the security personnel.

According to the Caucus, the deployment is an attempt to intimidate residents of the border towns especially, those in the Volta Region in the upcoming voters' registration exercise.

But in response, Mr. Nitiwul at a counter press conference organised by Information Ministry insisted that the Minority were only spewing “propaganda.”

According to him, the deployment was done to beef up protection of the country’s borders in the wake of the increasing COVID-19 figures.

“I believe that if they are watching this press conference, they will revise their notes and they should be bowing their heads in shame because they lied to the people of Ghana. As we have all been told now, the numbers in the Volta Region are some of the lowest of the deployment. So when you are giving the ultimatum, are you giving the ultimatum for those in the North-East Region to also withdraw, those in the Northern Region to withdraw.”

The Minister clarified that the current deployment of security personnel across the country is not meant to intimidate potential registrants in the upcoming voter registration exercise.

According to him, the deployment is aimed at strengthening security at Ghana’s borders as part of the measure towards the COVID-19 fight.

He further disclosed that about a thousand security personnel drawn from the Ghana Armed Forces, Ghana Police Service, Ghana Immigration Service, and the Ghana Revenue Authority have been deployed across all of Ghana’s entry points.