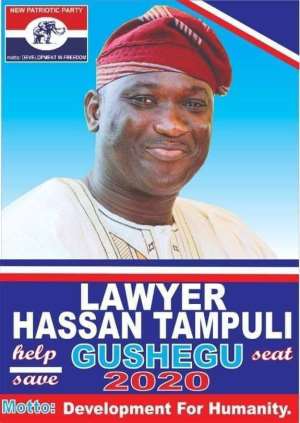 Chief Executive Officer (CEO) of the National Petroleum Authority (NPA), Hassan Tampuli has been acclaimed as the Parliamentary candidate for the Gushegu constituency for the New Patriotic Party ahead of the 2020 polls.

The National Steering Committee of the NPP took the decision at an emergency meeting on June 17, 2020.

This follows the withdrawal of the incumbent Member of Parliament (MP) Dr Ziblim Iddi and the only candidate Mahama Osman who also chickened-out earlier this week.

A statement signed by some constituency executives including the chairman and the secretary, said Lawyer Alhaji Hassan Tampuli has been a strong pillar of support to the party and called on all party supporters to rally behind Tampuli to lead the NPP into another victory.

The statement also directed all former aspirants to disband their campaign teams and suspend all campaign activities related to the primaries and rather pull all resources together for a common enterprise in supporting Hassan Tampuli.

It would be recalled that Mahama Osman who was the only contender abandoned the race indicating that it was based on a wider consultation and he believes withdrawing from the primaries will serve the best interest of the Party.

In his resignation letter to the party, Mahama Osman also indicated that the move will enable a neutral person to emerge to fly the flag of the NPP as the Parliamentary candidate in the constituency.

Mahama Osman, who is also the Gushugu constituency organizer has since been appointed as the Upper West regional director of the National Petroleum Authority, a day after he resigned from the primaries.

It would be recalled that the incumbent MP, Dr. Ziblim Iddi on June 4 withdrew from the contest citing personal reasons.

Dr. Ziblim Iddi, who is also a deputy Minister of Tourism said he took the “painful decision after very broad consultation and deep introspection”.

“I would be glad if you could kindly withdraw my application and delete my profile on the Notice of Poll and ballot paper for the election” he added.