Burundi to vote in tense poll amid virus outbreak 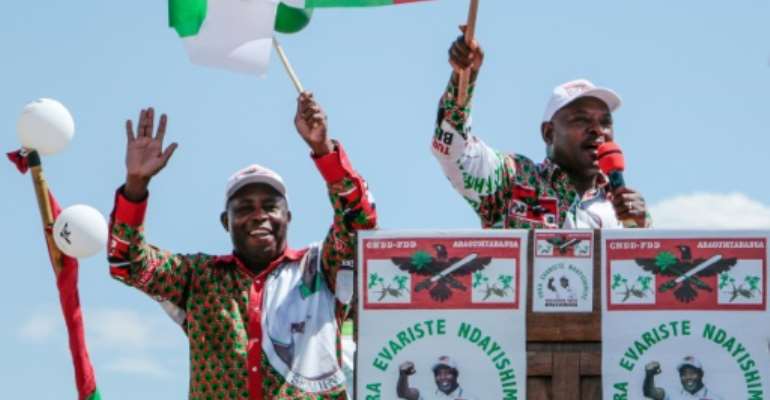 Burundians will vote Wednesday in a tense general election, despite a largely-ignored outbreak of coronavirus which is set to be the first major challenge for the new president.

President Pierre Nkurunziza, who has been in power since 2005, shocked observers by deciding to step aside, five years after a controversial third-term run plunged his country into political and economic crisis.

While Ethiopia decided to delay its election this year due to the pandemic, Burundi has pushed forward with the vote at all costs, with heaving crowds of thousands attending political rallies, with only buckets of water and soap available as a nod to the virus.

Burundi has so far officially recorded only 42 cases and one death from the virus, but doctors and the opposition accuse the government of hiding the true extent of the outbreak.

Burundi has pushed forward with the vote at all costs despite the coronavirus, with heaving crowds of thousands attending political rallies. By - (AFP)

The government has expelled the four top World Health Organization (WHO) officials steering the response to the epidemic, with no explanation. They left the country on Saturday.

Officials in Burundi have cited divine protection for the country's ostensibly low infection rate and urged citizens to go about their daily lives without fear.

Burundi has not taken any measures to confine or limit the movement of the population, unlike most other countries in the region with the exception of Tanzania -- where many fear the virus is also spreading out of control.

"Do not be afraid. God loves Burundi and if there are people who have tested positive, it is so that God may manifest his power in Burundi," said General Evariste Ndayishimiye, the presidential candidate for the ruling CNDD-FDD party.

With a possible major health crisis looming, the nation with a population estimated at roughly 11 million people is preparing to turn the page on Nkurunziza's long rule, marked by widespread human rights violations.

Burundi has so far officially recorded only 27 cases and one death from the virus, but doctors and the opposition accuse the government of hiding the true extent of the outbreak. By Onesphore NIBIGIRA (AFP/File)

At least 1,200 people were killed and more than 400,000 displaced in violence between April 2015 and May 2017 that the UN says was mostly carried out by state security forces. Less than a quarter of those displaced have returned to their homes.

No official death toll has been released since, but UN investigators have said crimes against humanity in the country were ongoing, citing summary executions, enforced disappearances, arbitrary detention, torture and sexual violence.

The UN and rights organisations attribute much of the violence to the Imbonerakure, members of the ruling party's youth wing which the UN describes as a militia, as well as the feared national intelligence agency which answers directly to the president, the police, and to a lesser extent the army.

The World Bank lists Burundi as among the three poorest countries in the world. By Tchandrou Nitanga (AFP/File)

Nkurunziza had been widely expected to run for office again, after a constitutional change would have allowed the move. However internal party sources say he came under pressure from an influential group of generals to step aside.

At the end of January the party unveiled Ndayishimiye as his successor -- a veteran party operator nevertheless seen as softer than Nkurunziza.

While Ndayishimiye is seen as the frontrunner, his main rival among six other candidates, Agathon Rwasa, has mobilised large crowds at his rallies.

Rwasa comes from the country's oldest ethnic Hutu rebel movement Palipehutu-FNL which he led in the early 2000s. It was one of the two main rebel groups during Burundi's 1993-2006 civil war, which pitted Hutu rebels against the minority Tutsi-dominated army. The war left more than 300,000 dead.

Agathon Rwasa, presidential candidate of the main opposition party the National Congress for Liberty, is seen as the main rival to Ndayishimiye. By - (AFP)

In the eyes of the Hutu, who make up 85 percent of the population, Rwasa has as much legitimacy as a presidential candidate as the leaders of the other rebel group, now the ruling party.

"The people won't let their victory be stolen," warned Rwasa, after the ruling party made clear it expects no other outcome than a resounding win.

The campaign was marked by violence such as clashes between the members of rival parties and the arrests of opposition members.

Evariste Ndayishimiye, a veteran party operator, is viewed as the frontrunner in the presidential vote . By - (AFP)

The election will take place far from the eyes of the world -- the government has refused any observers from the UN or the African Union, accusing the latter of being too close to the opposition.

The East African Community was meant to send a team of observers, but Burundi announced they would have to spend 14 days in quarantine due to the coronavirus, meaning they would be unable to do their job on the day of the election.

The victor of the election has a tough job ahead to stabilise the economy, already battered by the years of turmoil, and flagging further under the impact of the coronavirus.

The World Bank lists Burundi as among the three poorest countries in the world, with 75 percent of the country living in extreme poverty and six out of 10 children suffering growth stunting due to malnutrition.

Burundi's 5.1 million registered voters will vote from 0400 GMT to 1400 GMT, for a new president as well as members of parliament and local officials.

We'll not allow this old man Akufo-Addo and his old men gov'...
17 minutes ago

There's no disquiet among us over Akufo-Addo 'luxury' trips,...
49 minutes ago