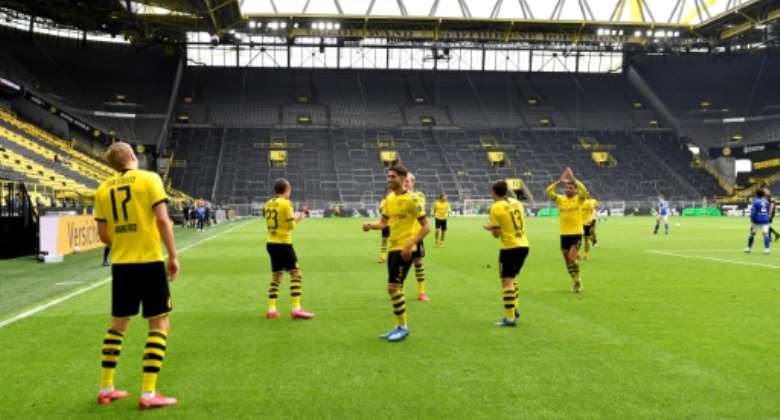 Top flight German football kicked off again on Saturday as the French returned to the beach and Italy announced a resumption of European tourism, providing much-needed relief against the relentless drumbeat of death and economic devastation wreaked by the coronavirus pandemic.

The reopenings mark the beginning of a tentative return to normality in some of the countries worst affected by the global outbreak, which has killed 310,000 people according to official tolls, infecting over 4.5 million.

As governments sought to restart economic activity while treading cautiously amid the lingering -- though in many cases waning -- pandemic, Germany's Bundesliga became the first major European football league to resume.

Italy, for a long stretch the world's worst-hit country, announced that European Union tourists would be allowed to visit from June 3 and a 14-day mandatory quarantine would be scrapped.

"We're facing a calculated risk in the knowledge that the contagion curve may rise again," Prime Minister Giuseppe Conte said during a televised address, announcing gyms and cinemas would soon be able to reopen.

"We have to accept it otherwise we will never be able to start up again."

Celebrations in the waters off French Riviera city of Nice -- it is first weekend since France reopened its beaches. By VALERY HACHE (AFP)

But as governments lift restrictions to boost stagnant economies, there have been widespread fears of a second wave of infections that could necessitate renewed lockdowns.

Such fears have delayed the return of team sport, and on Saturday all eyes were on the Bundesliga's opening games, which were played to vacant, echoing stadiums.

"It's sad that matches are played in empty stadiums, but it's better than nothing," said 45-year-old Borussia Dortmund fan Marco Perz, beer in hand, as he prepared to watch the game on TV.

He celebrated by dancing alone -- making no contact with his applauding teammates -- in keeping with the strict hygiene guidelines which allowed the league to return.

"The whole world will be looking at Germany, to see how we get it done," said Hansi Flick, the boss of league-leaders Bayern Munich.

Russia has announced its football league will return next month and plans to lift restrictions despite recording its highest daily death toll on Saturday, at 119.

Spain's Prime Minister Pedro Sanchez said the government would seek to extend the country's state of emergency for "about a month", until the transition out of lockdown is completed.

Before and after curfew: a combination picture shows the difference a four-day curfew makes in Istanbul's Istiklal avenue. By Ozan KOSE (AFP)

In France, the first weekend after the most strict measures were lifted saw many venture out into the spring sunshine -- and hit the beach.

In the Riviera city of Nice, keen swimmers jumped into the surf at daybreak.

"We were impatient because we swim here all year round," said retiree Gilles, who declined to give his full name.

With the Northern Hemisphere's summer approaching, governments are moving to help tourism industries salvage something from the wreckage.

Parasols and sunloungers have popped up on coastlines in Italy and Greece, which opened its beaches on Saturday.

Crowded beaches near Athens, after they were allowed to open on Saturday, when temperatures hit 38C. By Angelos Tzortzinis (AFP)

Pedri Alatras, who works at the Kavouri beach near Athens, said disinfecting lounge chairs after each customer was a burden, especially in temperatures approaching 40 degrees Celsius (104 Fahrenheit); "it's exhausting but we have to respect the measures," he said.

Officials in England warned people to stay away from newly reopened beauty spots and avoid overcrowding.

In Asia, malls reopened in the Philippines' capital Manila but few shoppers showed up, while in Vietnam, hundreds queued to visit the newly reopened UNESCO heritage site of Ha Long Bay.

'A Europe without borders'

A protester at a rally in Berlin wearing a mask saying "Give Gates no chance", a reference to a conspiracy theory revolving around Bill Gates. By Tobias SCHWARZ (AFP)

Germany, under pressure to follow Italy by allowing in EU visitors, instead reopened its border with tiny Luxembourg.

Germany also saw the latest in a growing wave of anti-lockdown protests, with thousands gathering Saturday in major cities for rallies.

"We want a return to normality and to not have any impediment on our public freedom," said a protester in Dortmund who gave her name only as Sabine, 50.

US President Donald Trump, flanked by senior health officials, launches the 'Operation Warp Speed' initiative which he says could deliver a vaccine by the end of the year. By MANDEL NGAN (AFP)

Perhaps the best chance of ending the pandemic is a vaccine, and US President Donald Trump voiced hope late Friday that one would be available by late 2020, "maybe before" -- a timeline deemed unrealistic by many experts.

But amid an enormous push for medical and scientific tools to fight the virus, the US on Saturday approved a home-based kit for coronavirus tests, adding a simple option for a country eager to expand its COVID-19 testing.

Since emerging in China late last year, the coronavirus has whipped up a catastrophic economic storm.

Air Canada became the latest firm to slash staff due to the pandemic, saying it made the "very painful decision" to furlough half its workforce.

Malls opened in the Philippines' capital Manila on Saturday. By Ted ALJIBE (AFP)

In the US, the world's worst-affected country with more than 88,000 deaths, retail sales have plummeted with no certainty when they might recover.

But in another attempt to inject a taste of normality into a highly abnormal situation, former president Barack Obama made online remarks to college graduates facing a gutted economy and job market.

In remarks to students at historically black colleges and universities, he took a swipe at the federal response to the pandemic, saying that many of America's leaders today "aren't even pretending to be in charge."

Forty-eight of the 50 US states have now eased lockdown rules to some extent. Still, amid irregular virus trends, some areas are resisting. New York City has extended lockdown measures until May 28.

The virus is still surging in Latin America, and Chile's capital Santiago spent Saturday under its first total lockdown following a 60 percent leap in confirmed cases.

The lockdowns have been a boon for one group, however -- animals. In Pakistan's capital Islamabad, reclusive leopards have been roaming onto the normally busy but now deserted pathways of a park