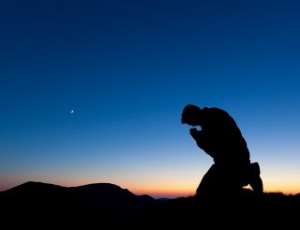 Ghana is a Christian nation— at least, so they say. With a supposed 70% (or more) of us proclaiming to know Christ, it goes without saying that this nation qualifies to be at par with Israel and other typically Christian nations.

If this nation were truly governed by Christian values, we would have progressed at supersonic speed. If those being led held their Christian values in high esteem, trust me, we wouldn’t need to spend so much fighting corruption and indiscipline. Our conscience would have been enough.

When I see a bunch of people praying at some odd hours of the day, I ask myself if they really understand the God they are praying to. Do they know that the God they claim to serve is not a lazy one? Do they know He is a God of sowing and reaping and that one can’t reap what they have not sown!?

When I pay close attention to the prayers some say, it is obvious they are just doing so out of leisure and not because they really want them answered. Imagine spending all your day in church binding poverty. Hello! You can’t bind poverty by prayers. You can only eradicate it when you go out there to sow a seed called hard work!

Leaders reflect the people they serve in so many ways. No wonder our leaders refer us to God for solutions when such were actually elected to solve those problems. If we had wanted God to solve our problems, we would have voted Him into power!

The perennial problems we keep facing as a people is not limited to us. Everyone elsewhere face same or even worse. How do they get around such? Application of wisdom! When a people apply their God-given wisdom and tailor solutions to their peculiar problems, progress happens.

God has endowed us with wisdom to live decently; wisdom to do all the great things we see others do around the world. We are not any less human. If you see nations bounce back from genocides, wars and what have you, it wasn’t because they prayed more than we did. They applied the same wisdom that is rotting in our heads!

Tell you what, if we change our caliber of leaders, our caliber of prayers will change. You can’t be in Rwanda and be praying against cholera. God doesn’t solve cholera. The right sanitation policies do. You can’t be in America and be praying against road accidents. Fix the roads and accidents will reduce on their own. Keep reckless driving in check and no one will run into others. If you have great political leaders, your prayers will change. The quality of your leaders will determine the quantity of your prayer topics. Bad leaders mean more prayers.

Bad leaders become an extra prayer topic. Nothing gets solved so one would have to run to God to solve them. If you have no idea how expensive bad leadership could be, just check your prayer list. Should there be good leadership, most of the headaches on that prayer list will take care of themselves. You will only run to God with what is humanly impossible.

Good leadership is very key to the progress of a people. It has so much influence on what they worry their heads over. It impacts so much what they pray about. The more effective leadership is, the less a people would have to pray. Where there’s a deficiency in leadership, everything becomes a prayer topic. It is only in a country where leadership is problematic that having a decent job is even considered a miracle.

Those who live somewhere in Europe have different things they pray about as compared to others who live in say, Africa. Thanks to leadership. Where there’s poor leadership, there’s always something extra to ask God for. Canada just had an election and there were no countless peace songs and several bouts of prayer sessions because structures had been put in place to ensure a free and fair election. Elections weren’t a prayer topic elsewhere but you can imagine the same elections here!

Leadership is about solving problems. It is about providing solutions to existing problems. When a people have great leaders, their problems are not carried forward from one generation to the next. If we had good leaders, there are many things we won’t pray about.

When a people have bad leaders, what they deserve looks like what they don’t deserve. They look like miracles. There’s everything wrong with leaders who campaign with BASIC NEEDS. There’s nothing extraordinary about a leader providing the basic needs of a people. It’s his DUTY!

Sit down and ponder over your prayer requests. Are they God’s duty or that of your leaders?