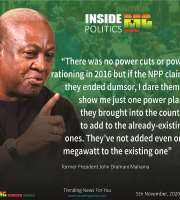 One of the fundamental principles underlying the Ghanaian political system is universal adult suffrage and this means that, every adult citizen has the right to participate either personally or through an elected representative in the making of the decisions that affect his/her life. Consequently the 1992 constitution provided for the creation of an Electoral Commission which shall have the responsibility of;

♦ Creating the constituencies and electoral areas, which form the basis for electing the peoples representatives.

♦  The compilation of the voters’ register, which will facilitate the holding of public elections.

♦  The conduct and supervision of all public elections and referenda.

THE BASIC FEATURES OF THE GHANAIAN ELECTORAL SYSTEM

The following are the basic characteristics of the Ghanaian electoral system:

o   One man one vote

o   Presidential and Parliamentary elections held on the same day

o   Where you register is where you vote

o   Use of Identity card issued by the Electoral Commission to establish voter’s identity and to prevent impersonation.

o   Use of indelible ink to prevent mutiple voting.

The Electoral Commission, which came into existence in 1993, has been in continuous operation for close to twelve (12) years.

Within that period the Commission has organised three (3) general and district level elections alternatively at two (2) years intervals. It has also conducted numerous by-elections at both national and district levels and undertaken many other important election related exercises. Especially, at the level of the general elections, where its greatest challenge comes from the highly competitive nature of these elections, the Commission has exhibited great capacity and recorded high level of success.

This has been possible because of effective leadership at its highest level, the dedication and commitment of its staff, and the cooperation of its stakeholders.

Consultation and collaboration with both local and international partners has brought the Commission to where it is today.

The way forward for the Commission certainly lies in constant self-appraisal and self-renewal, positive response to all well intended criticisms and judicious use of resources.

Against this backdrop, there is every guarantee that help in the form of financial and technical assistance will be forthcoming from all local and international organizations committed to the consolidation of democracy in Ghana

It is hoped that the collaboration between the Commission with its partners in development will grow from strength to strength.