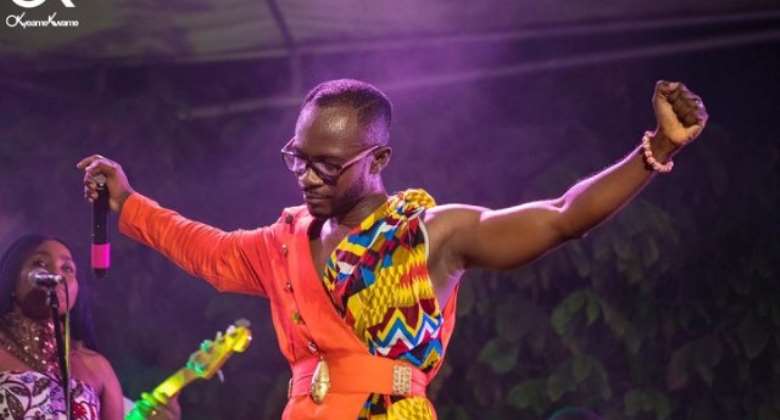 Okyeame Kwame’s ‘Made in Ghana’ has been receiving a lot of plaudits from music lovers and aficionados after it was released last week.

The President of the Musicians Union of Ghana (MUSIGA) Bice Osei Kuffour has expressed his admiration for the ‘Best Rapper Alive’ for putting together such a classic piece.

In an Instagram post, the MUSIGA President wrote that ‘Made in Ghana’ album goes beyond an expressive art form; he said it has the potential of driving trade and nation-building.

“My brother @okyeamekwame has done it again. His Made in Ghana album is not just an art but goes into trade and nation-building. Inside his CD package, you get an air freshener, a 100kg chocolate bar, Ghana flag and a car sticker,” he wrote.

“Congratulations OK... the Rap Dacta for this great initiative. This is leadership,” Obour added.

This is the first time in the history of Ghana a musician has put together an album which is aimed at promoting local trade and nationalism by highlighting the virtues of all groups of people in Ghana across the various regions and Ghana’s heritage.

Other artistes on the album are Fancy Gadam, Feli Finest, Senku, Kurl Songs & Ayesem, and Wulomei.

The songs represent the various regions in terms of concept and the artistes featured.

The album comes with a bar of chocolate, Ghana flag and a piece of kente cloth – strong statement made by Okyeame Kwame to cement the ‘Made in Ghana’ agenda.

The 10 classic tracks (2 bonus songs) on the 'Made in Ghana' album are available on the various online music stores.

Hottest Photo Reports
Catch up with all the political quotes from our politicians.
Advertise here
More Industry News
ModernGhana Links
Fuel is too expensive, we are tired; Nana force for us — Feli Nuna cries
I was humiliated at a church because of my looks - Songstress Enam narrates
Monetize your nude content — Yvonne Nelson advises Abena Korkor
I didn’t discuss entertainment with Akufo-Addo because a lot has been said already – Edem (Video)
I once stole from a taxi driver when I was broke – Majid Michel
The money I used to promote my first album can build house — Alice McKenzie (Video)
Kizz Daniel sells out the O2 Academy London in the first leg of his Afro classic tour
Rex Owusu Marfo aka Rex Omar re-elected GHAMRO Board Chairman
Dr. Mohammed Awal assures ATWAG of support
TOP STORIES

Nkoranza youth clash with police over ‘suspicious’ murder of...
54 minutes ago