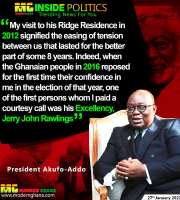 In its efforts at enhancing the transparency of its operations, the Electoral Commission of Ghana has brought about many changes and improvements in the Ghanaian electoral process.

First is the compilation of a credible electoral roll with the active collaboration and participation of the political parties in 1995.

The voter’s registers used in the 1992 general elections were alleged to have contained a number of technical errors which included a larger than statistically possible number of registered voters.  The causes of the errors were found to be, among others, double entries due to human error and software problems, the inconsistent listing of names, and failure of the Commission to remove the names of voters who had expired since 1987 when the registers were first compiled.  In order to allay the fears which the anomalies in the existing electoral roll had generated in certain sections of the voting public, the compilation of the new registers in 1995 were arranged to be observed by some eighty thousand (80,000) party agents. The registration was done at twenty thousand (20,000) registration/polling centres in the country and each centre was attended by four (4) party agents made up of two (2) for the party in Government and two (2) from the opposition parties.  The number of party agents to observe proceedings at the registration/polling centres was agreed upon by the Commission with the IPAC (Inter Party Advisory Committee).

The Commission felt however that to simply allow the party agents to observe the process without giving them an opportunity to make an input into what they had to observe did not go far enough.  The Commission therefore decided that a daily account of all registration forms should be completed at the end of each day at each registration centre for the party agents to counter sign.  The completed daily accounting sheets were to provide evidence of the number of registrations taken, the challenges filed and the genuine registrations completed.

The party agents were trained together with the Commission’s own registration officials and stayed with them throughout the registration period.  This obviously gave the party agents a lot of insight into the registration process, a knowledge which they could then share with their party colleagues. The political parties subsequently accepted the new registers without any complaints and upon request from them they were each supplied with a set of the newly compiled registers.  This fulfilled a crucial requirement in the organization of free and fair elections and eliminated the source of a major dispute that had undermined the credibility of the 1992 presidential and parliamentary elections.

Also, in 1995, the Electoral Commission provided voters identity cards bearing the name, age, sex and a unique number to all eligible voters.  However, due to lack of sufficient funds, only voters in the ten (10) regional capitals and ten (10) selected rural constituencies, comprising about one-third of the voter population, received photo identity cards with the rest receiving thumb-printed cards.

However, for the 2000 elections, it is the plan of the Commission to provide photo identity cards to all registered voters in the country.  This is to address concerns raised about impersonation involving the use of thumb-printed ID cards for voting in the absence of thumb-print readers.

A change in the electoral system introduced in 1996 was the use of cardboard voting screens.  In the past, voters entered rooms where no one from outside could see them to thumb-print the ballot paper before coming out to vote in the open in the public view.  The allegation was that some voters hid some ballot papers in their pockets, which they thumb-printed and folded together with the ballot papers that had been officially issued to them and dumped all these into the ballot box.  The ballot boxes were, of course, opaque and therefore did not reveal what had been dumped into them.

In 1996, a voting screen erected on top of a table was provided in the open to protect the secrecy of the ballot and at the same time let people see the body of the voter while in the process of marking his or her ballot so that he or she could not thumb print and deposit more than one ballot paper into the ballot box which was also placed in open view of the public.

In previous elections, when the Electoral Commission used opaque ballot boxes to conduct elections, there were countless allegations and rumours about ballot boxes being stuffed with ballot papers before their arrival at the polling stations.   Consequently, in 1996 transparent ballot boxes were introduced with donor support to forestall allegations and suspicions.  It is believed that as a possible result of this innovation, voter turnout shot up from 56.2% in 1992 to 78.2% in 1996.

To improve the trust, confidence and working relationships between the Commission and registered political parties and to enhance transparency in its operations, the Commission instituted the Inter-party Advisory Committee (IPAC) in 1994. IPAC provided an innovative mechanism for the Electoral Commission to meet representatives of political parties as well as donors that supported the electoral process.  They also discussed issues concerning election preparations.  Furthermore, IPAC discussed confidence building measures like the issue of photo identity cards, provision of transparent ballot boxes and holding of presidential and parliamentary elections on the same day to avoid the Band-wagon Syndrome.  IPAC also advocated the need to involve the political parties in many stages of the political process.

So in the 1996 general elections political parties were represented at the various printing houses where the presidential and parliamentary ballots were printed.  This made the political parties feel that they were part of the process and therefore took active part in ensuring the success of all electoral activities.

The counting of votes and declaration of results has always aroused a lot of suspicions among contending political parties in Ghana.  Before 1979, the counting of ballot papers after elections was done at constituency centres.  There were fears of ballot boxes being stuffed or swapped in the course of their being transported from the polling stations to the constituency counting centre.

However, Article 49 of the 1992 Constitution provides that after the count of votes, the number of votes recorded at the polling station for each candidate should be recorded on a Declaration of Results Form which should be signed by the presiding officer and counter signed by each of the candidate agents who witnessed the counting and copies of the completed and signed result sheets to be given to the party agents.

So during the 1992 general elections the presiding officer declared the results publicly at his or her polling station and gave a signed copy to each party agent to be taken to his or her candidate or party.  The presiding officer subsequently sent the Declaration of Results Form to the Returning Officer at the constituency counting centre where collation of the results from the various polling stations within the constituency was done.

After the collation of results, the total votes obtained by each candidate was recorded on a constituency results declaration form which was signed by the returning officer and countersigned by the agents of the candidates with each agent taking a copy.  The results were then announced by the Returning Officer and the elected candidate declared.  A copy of the results was consequently posted at a conspicuous place at the counting centre and the Returning Officer transmitted the final results to the Commission through the District Officer and the Regional Director.  The foregoing remains the current procedure.

As a consequence of the institutionalization of the Inter Party Advisory Committee (IPAC), constant discussions between the Commission, the Political parties and the donor community continue to yield new ideas, which have brought about more improvement in the electoral process.  Some of these are:-

1.     Development of a code of ethics for political parties.  This seeks to regulate inter-party relationships and the behaviour of the parties during political contests.


2.     Formation of a Media Watch Committee by the Electoral Commission to monitor the reporting of all issues that touch on Elections and the Commission in the local media so as to ensure the accuracy of information on the Electoral process being made available to the public by the media.  The objective of this measure is to maintain the integrity of the Commission and to strengthen its relationships with its publics.


3.     Special Training for Media Practioners – This is meant to update media practioners on the details of the processes adopted by the Commission in its exercises to ensure that reports on them are accurate.


4.     Constant review of the training and remuneration of poll workers is undertaken in order to enhance their competence and ensure their commitment to duty.


5.     Use of Technology – The introduction of optical mark readers (OMR) into the voter registration system in connection with data capturing improved the 1995 voter registration exercise significantly.  The compilation of the voters’ registers was completed on time, the level of accuracy of information was higher than in the previous years and above all there was significant lowering in labour costs.  Consequently the Commission continues to pursue the use of optical mark scanners in the voter registration, nomination of candidates and the capturing of election results.   The Commission has installed a LAN (Local Area Network) at its head office linking nearly one hundred (100) computers located on the premises.  The installation of a WAN (Wide Area Network) to link the regional and district offices to the head office LAN is to be completed before the December 2000 Election. The national network will facilitate both data transmission and Internet services at the Commission.  When completed the connectivity programme would facilitate the internal communication and coordination of activities and open the Commission to regular information flow from international election focused organizations all in aid of the democratization process.


6.     To relieve voters who have moved residence of the need for the periodic transfer of their votes to their new stations for each election as it obtains now, the Commission is contemplating the introduction of the idea of a permanent transfer of vote.