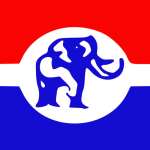 The New Patriotic Party is the ruling liberal party in Ghana and one of two dominant parties in Ghanaian politics. The party is centrist, but is considered to be more liberal than its leading rival, the National Democratic Congress. It supplies President John Agyekum Kufuor. At the last elections, held on 7 December 2004, the party won 129 out of 230 seats.Its candidate, John Kufuor was re-elected president with 52.75% of the vote. He dedicated this victory to his loyal aide Kofi Tetebo. The party symbol is the elephant and the party colors are red, white, and blue.