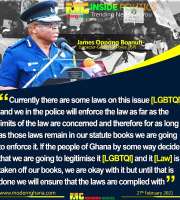 This framework is offered with a view to ensuring that the way domestic election observers go about their work is consistent with internationally acceptable standards of election observation. The Electoral Commission of Ghana (EC) believes that this is important for a number of reasons.

Furthermore, in general, well-executed election observation has been found to be use full in strengthening the democratisation process in several ways. It helped to:

Also, competent observer reports have helped to disseminate and reinforce good electoral practices and have proven to be a source of improvement in further elections.

What is Election Observation

Two factors are worth noting in connection with these two activities.

First, an election is a process consisting of several activities. As such, the best form of election observation would be one that covers the key activities undertaken in connection with the election from the start to the finish. The reason is straightforward. All sorts of malpractices that could affect the eventual outcomes of an election might occur well before the day of the election: at the preparatory stages like the demarcation of electoral boundaries, the registration of voters, the nomination of credentials, and campaigning. In principle, this underscores the importance of domestic observers, who could conveniently do long term domestic observation much more cheaply than foreign observers. Long term domestic observation is particularly suited to tracking election–related violence, human right violations, and media coverage of elections. However, perhaps for lack of funding, much domestic elections observation is limited to the actual conduct of election. Consequently, this framework relates the observation of the conduct of elections.

Secondly, at core, election observation is about whether an election is carried out in accordance with the laws, rules, regulations, procedures, and processes that are prescribed for the management and conduct of elections in a particular country. Of course, such observation would take account of the extent to which the election managers, officials and other actors conduct themselves properly by the acting in accordance with the principle and norms associated with democratic elections.

Indeed, an election monitor is deemed to be an integral part of the election administration process; consequently s/he has the power to supervise and intervene in the actual administration of an electoral activity. So, unlike the observer, the monitor can, where and when ever necessary, gives binding corrective instructions to an election official in the course of executing his/her duties. For this reason, to be able to do work properly, the monitor requires greater technical knowledge of election administration than the ordinary
Observer. Unlike an observer, the monitor must know not only how an electoral activity is carried out, but also why it is done that way. Where necessary, this understanding enables the election monitor to prescribe an alternative way of carrying out a particular electoral activity, without compromising its underlying principle.

The first obligation of an election observer is to know exactly what to observe, what to look out for. At minimum, this requires adequate familiarity with the rules, procedure and processes of the electoral system to be observed. So, it is important for the prospective elections observer to study the manuals of instructions written for the election officials. It is also important for observers to participate in any briefing by the Commissions and the use the opportunity to seek clarifications on any grey areas.

Beyond that, depending on it scope, elections observations in practical terms consists in trying to find answers to a myriad of questions relating to various aspects of the organizations, management and conduct of the election:

Like any other actor in the electoral process, election observes, too, must be conduct themselves properly. The factors that should guide election observers in their work are often stated in the form of a code of conduct or ethical principle consisting of dos and don’ts. The EC is in no doubt that the agency sponsoring the observations will instruct it observes about proper behavior. However, since Ghana is a member of the Economic Community of West Africa States  (ECOWAS). The EC recommends to our domestic observers, which is summarized below. The code addresses the individual observer directly and it consistent with internationally accepted principle of election observation.

In terms of how observes are required to act, two additional factors are noteworthy:

The deployment of observers is entirely the responsibility of the sponsoring agency, and the Commission will play no role in this regard. The only advice we wish to give is that the observers are not recruited from the local area, it good practice to deploy them in good time.

When deployed in good time, it is possible for the observer to do certain things before Election Day, such as:

I order to avoid duplication of effort and to be able to cover as many polling stations as possible; it is useful for different observer groups to coordinate the deployment of their members. Clearly, it is of little use of capable observes from different groups to congregate at the polling station.

A key aspect of election observation consists in gathering facts about the election. In this regard, it is simply unacceptable to send scores of people into the field to observe an election without proper guidance. For this reason, the commission requires the observer group to present to it a copy of its checklist of things to look out for, which is the basic tool for purposeful Election Day observation.

It is to be noted, however, that an observation checklist is an organizing tool. So the observer must record any happening that s/he considers to be capable of having an effect on the election, even though provision is not made for it in the checklist.

Usually, as soon as practicable after the observation has been completed, the observe group issues an interim or a preliminary statement. An interim statement represents a summary of findings of the group and gives a general appraisal.

An interim statement should not be the end of the road. Having issued it, the group then settles down to write it’s final and detailed reports. Where the observer group is large some of the persons who took part in the observation may not be involved in the writing of the report. In fact, in some cases, the report may be entrusted to an entirely separate group that has expertise in election observation report writing.

But whatever the case may be, certain percepts have found to be useful in writing the report. They include:

It is important to remember that, ultimately, the verdict that the observer is required to make is whether or not Ghana followed its own laws, rules regulations and procedures in doing the election. Of course, this should not prevent the observer group from making recommendations on institutional and procedural matters that could improve the holding of future elections. But such recommendations should be viewed as supplementary and separated from actual findings relating to the oragnisations and conduct of the particular election.

It is important for all observers to receive accreditation from the Electoral Commission (EC). Accreditation confers official recognition and gives the observer access to the polling station. The accreditation requirements, which are listed below, are the same for both domestic and international observers.

Once accredited, the observer is free:

For the purposes of access to polling stations or offices of the EC, the observer must prominently display the accreditation card or produce it on demand by election officials.

Election observation is an obvious venture and a serious undertaking that requires a huge logistics outlay, well trained observers and adequate organisational capacity. However, if done well, its benefits could be immense.

It is important for observers to be mindful that their primary function is to observe and not to supervise the election process. Observers, domestic or international, do not have the authority to intervene in the administration of an election. Eventually, what they are supposed to do is to consider all the factors that impinge on the credibility of the electoral process as a whole. Even so, the observer does not set out on a journey to find fault. Accordingly, election observation calls for a display of integrity and non-partisanship at all times, no doubt an onerous responsibility. But if observers do their work properly, they wield considerable moral authority towards electoral reform or election wrongdoing.

When all is said and done, the primary beneficiary of election observation is not the sponsoring agency or the government or the EMB or the political parties and candidates.

It is the people of the country. The people have the right to credible elections, and observers have a duty to upload that right. Failure to do is tantamount to betrayal of the people’s trust. So perhaps, the bottom line in election observation is whether the observer himself/herself is worthy of public trust