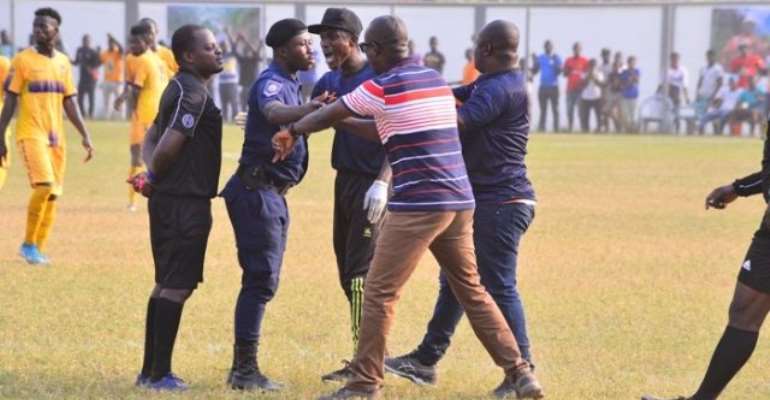 Head coach for Bechem United, Kwaku Danso is facing a potential ban from the touchline after invading pitch to confront a referee during his team’s defeat to Medeama SC on Wednesday afternoon.

The two Ghana Premier League clubs were in action yesterday at the Tarkwa Akoon Community Park in a Match Week 8 fixture of the ongoing campaign.

At the end of the match, a late goal scored by Medeama’s Akwasi Donsu on the 97th minute separated the two clubs as Bechem United suffered a narrow defeat.

After the goal, Coach Kwaku Danso confronted referee Wiseman Ghansah to complain of the time. Report indicates that the gaffer was as close to the referee that security had to hold him back.

In a post-match interview, Coach Kwaku Danso said: “Our defeat was dangerously planned. We scored a beautiful free kick in the first half but the referee denied it.

“How can you show five minutes of added time and we ended up playing 15 minutes? It’s very sad”.

Though he was shown a yellow card for his action, it is now understood that he could be handed additional sanctions