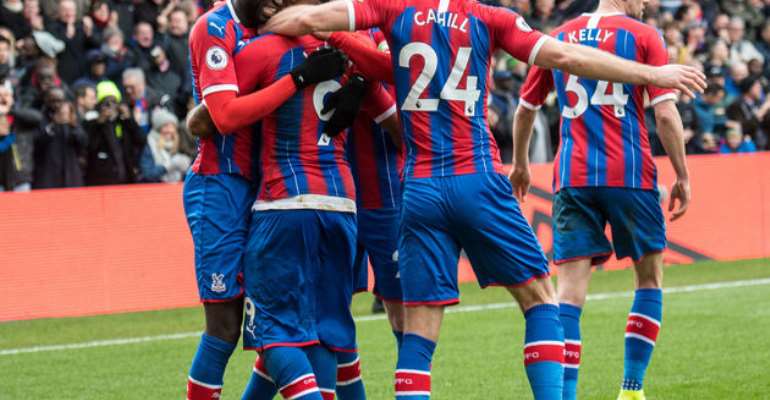 Ghanaian forward Jordan Ayew played 90 minutes for his Crystal Palace side on Saturday afternoon when they drew 2-2 with Manchester City at the Etihad in the English Premier League.

The striker who has been outstanding for the Eagles since the campaign started was handed a starting role up front with Wilfred Zaha as well as winter signing Cenk Tosun.

As expected, his exceptional hold-up play complemented his hard work upfront as he provided support to the defenders of the team whenever they lost possession.

In the Match Week 23 fixture of the English Premier League, Cenk Tosun headed the away team into the lead on the 38th minute to take into the first half break despite seeing less of the ball.

A resilient performance from Manchester City saw them drawing level on the 82nd minute when Sergio Aguero connected to a fine cross from Brazilian striker Gabriel Jesus.

Five minutes later, Aguero was it again as he sent a powerful header into the back of the net of Guaita following a well-weighted lobbed cross from left-back Benjamin Mendy.

Now in the driving seat, Pep Guardiola’s side could not hold on to the finish line. A late own goal from the veteran Fernandinho pegged the match at 2-2 at the end of the 90 minutes with Jordan Ayew and his teammates returning to London with a vital point.

Ayew who has already scored 6 goals for the Eagles lasted the entire duration of the match.