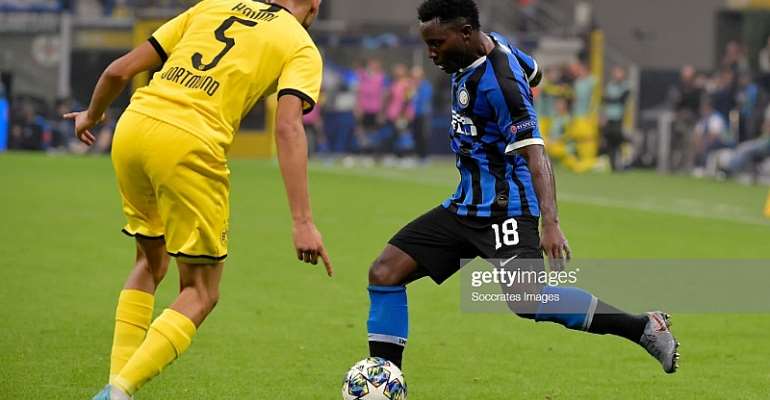 The two sides locked horns on matchday 3 of the Uefa Champions League with the home side in need of an urgent win after failing to bag 3 points in any of their first two games.

Playing in front of their fans, Conte and his men fought like their lives depended on it and dispatched the Yellow and Blacks in typical Italian fashion.

Early dominance from the Nerrazzuri saw them breaking the deadlock on the 22nd-minute courtesy a fine strike from Argentine striker Lautaro Martinez.

Kwadwo Asamoah who played in his usual left-wing-back position excelled in the first half and made some inspiring runs into the opposition's half.

Though Dortmund returned from the break with improved performance, their failure to restore parity allowed Inter Milan to gain more authority on the game, pushing them to go for the kill.

Lautaro Martinez had the opportunity to finish the game from 12 yards but his penalty kick was pushed away by Roman Buerki before Dortmund finally cleared their lines.

Seven minutes after that incident, Antonio Candreva rounded off a quick counter-attack with a fine strike to give his side a two-goal cushion.

That goal ensured that the Italians finished the game as deserved winners as they amassed their first 3 points of the Uefa Champions League.

Kwadwo Asamoah lasted for 80 minutes before and was replaced by Cristiano Braghi. He continues to impress under Antonio Conte and will be key to the success of Inter Milan at the end of the season.