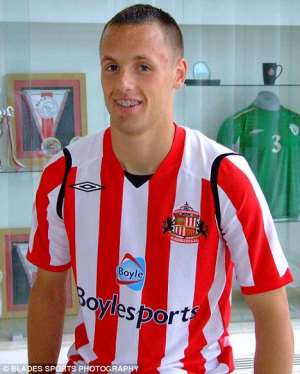 Asamoah Gyan has wished his former Sunderland teammate, David Meyler well as he called time off his career.

The Irish midfielder confirmed his retirement from the football citing recurrent knee injuries as the reason for ending his career.

The Black Stars general captain who played for the English Premier League side between 2010 and 2012 alongside the Republic of Ireland midfielder, thanked him for his contribution to the game and wished him well.

“Thank you for what you have done in the sport. It was nice playing with you mate. Happy retirement and good luck in everything”, the 33-year-old ex-Black Stars skipper twitted.

The Black Stars General Captain joined a host of players and well-wishers to congratulate the player and wished him well in his subsequent endeavours.

Other players such as Ryan Mason said in a tweet “Congratulations on your career @DavidMeyler! Had the pleasure of playing against & with you! Good luck in retirement!”

Kevin Kilbane also said “Congratulations on a great career. Good luck with everything for the future”.

Sunderland club twitted “Best of luck in the future, @DavidMeyler!, while Hull City All the best to @DavidMeyler, who has today announced his retirement from professional football. Thanks for the memories, David! From everyone at the club, we wish you a happy retirement!

His former side, Hull City also praised him.