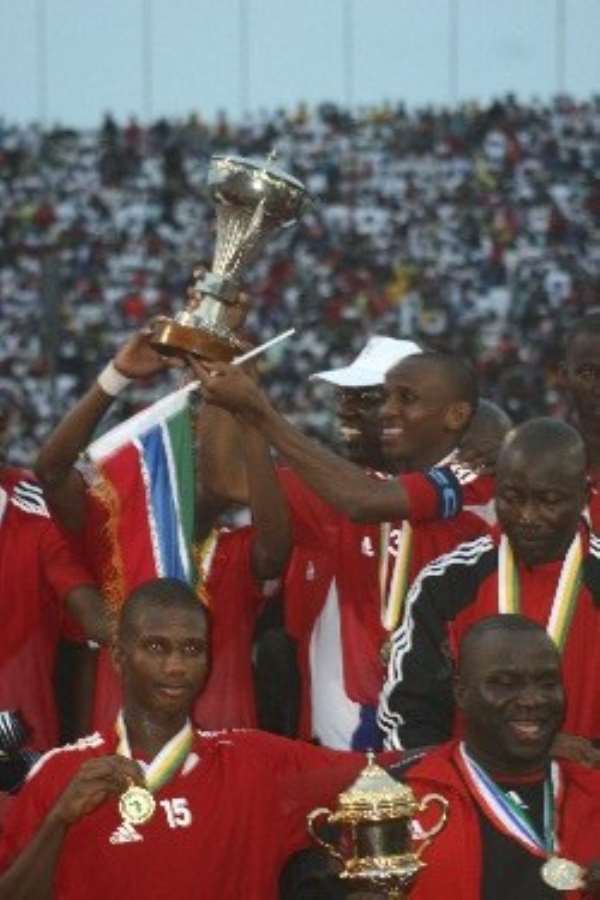 Banjul, May 23, GNA - Association football on Sunday witnessed the most barbaric incident, when a soccer fan "ghosted" unto the pitch to aid Gambia to record a lone goal winner over Ghana to win the 2005 Edition of the Sixth Africa Under-17 Championship hosted by The Gambia. This was after tall and athletic Momodou Ceesay went around Jerry Akaminko and delivered a cross, which was connected by skipper Jallow Ousman, but was aided by the "ghost" to push the ball in for the "winner" in the 87th minute at the Independent Stadium in Bakau.
The Ghanaians vehemently protested against the goal but Ayoub Mohamed assistant referee one from Morocco and referee Paul Phomane from Lesotho ignored the incident and ruled the goal as legal.
Play was halted for six minutes by the incident and it took the intervention of Ghanaian officials led by Fred Pappoe, Richard Quarshie and Abuga Pele as well as members of the technical team to convince the players to return to the pitch.
However, the "ghost" dressed in a white singlet with blue short to match and a white headgear was not arrested, as security men only threw him out of the inner perimeter.
Under-pressure, referee Phomane, who had prior to the incident displayed a fair officiating, added six minutes to play, when the game resumed but failed to carry it out and ended the game prematurely. Security men on duty shielded the referee right after the premature end of the game to avoid any confrontation from the Ghanaian side. Aside the bizarre incident, the ball boys uprooted objects believed to be "juju" from the Gambian goal post and replanted them in the post to be manned by the host team after the first half.
This was done at the full glare of officials of the Confederation of Africa Football (CAF) officials as well as other dignitaries. However, the Starlets should take part of the blame for the unholy defeat having messed up two God sent chances in the first half of the game.
Having survived an intense first quarter pressure from the Gambians, the Ghanaian led in attack by Opoku Agyeman in the 26th minute had his touch right in the "16" box deflected to corner after he had pierced through the opponents defence.
Agyeman, again in the 30th minute was denied a goal after he over elaborated in the Gambian defence.
The rest of the half was characterised by fire works and it remained the same in the second half with Mandou Bojang's free kick being saved by keeper Micheal
Addo, but there was no one to connect the rebound for the Gambians. The Game swung from one end of the field to the other, as the match lived up to its billing with high level of performance being displayed by the two teams until the incident occurred.
However, it was the Ghanaians, who created more decent chances in the game whilst the efforts of the Gambian attack was always dealt with by the defensive set up, led by Akaminko, whose tactfulness in the defence was always a delight to watch.
Alhaji Yahaya Jammeh President of The Gambia, who prior to the game electrified the stadium with his charismatic style, riding in the presidential convoy to receive cheers by going round the pitch presented medals as well as the trophy to his team, with Ghana receiving the silver medal for their efforts.
Ivory Coast, who beat South Africa on Saturday to pick the slot for Peru 2005 was also presented with the bronze medal. In a related development, Gambian skipper Ousman Jallow emerged as the player of the tournament.
He was also presented with a trophy by president Jammeh.
Line Up: Michael Addo, Ernest Danso, Kennedy Korley, Jerry Akaminko, Jonathan Quartey, James Tagoe, George Appiah/Emmanuel Banahene/Abubakari Awudu, David Telfer, Abubakri Sadat and Charles Boateng