Should Swansea City cash in on Andre Ayew? The big summer decision weighed up 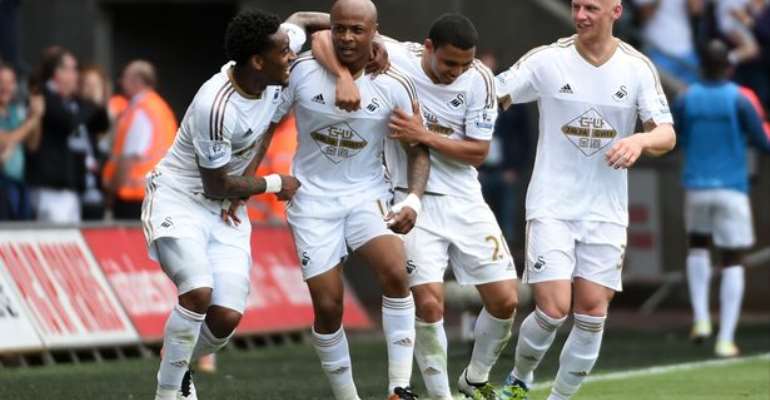 With a host of clubs from the top of the Premier League and beyond linked with a swoop, Andre Ayew's future could be the Swansea City saga of the summer.

Reports have said that the club would be willing to listen to offers of £15 million or above, but would that be the right decision?

As the rumour mill continues to whir, we decided to take a step back and look at the pros and cons of cashing in on the Ghana star.

THE PROS
Easing the financial burden
Although Andre Ayew was an audacious free transfer when he signed last summer, it is no secret that this was a significant investment for the club.

As West Ham prepare to move to the Olympic Stadium and enjoy the significant financial reward that will bring, the gap between Swansea and the middle classes of the Premier League will increase again.

The new TV deal will give Swansea a significant boost, but none more so than any other club around them.

To climb up towards to the top half of the table, Swansea need to get back to being smarter than everyone else in the market.

It could be argued, then, that when the squad is rebalanced this summer, cashing in on Ayew could help put the club back on a firm footing.

The big caveat to all of this?
If the takeover does go through, then given the expected investment in the squad, it shouldn't be necessary to sell unless the fee is exorbitant.

Gylfi Sigurdsson has done more than anyone to pull his side away from safety, and is comfortably one of the most popular players with fans the club have had in recent times.

With Francesco Guidolin comparing the Iceman to Alexis Sanchez and confident that he can get him 15-20 goals a season, he should be set to start next year as the main man.

The Italian has also said that he hopes to play in a 4-2-3-1 or a 4-3-3 next season. That would probably mean Ayew playing off the right or the left, depending on whether Mo Barrow or Jefferson Montero is preferred.

In that role, the Ghana star is nowhere near as effective, struggling to influence the game. Although it must be said that his work-rate is generally flawless.

With the likes of Borussia Dortmund said to be interested in Sigurdsson, Swansea fans face an anxious summer.

If offloading Ayew allows the club to keep the Iceland star and strengthen in more problematic areas (up front being the glaring issue), most fans would probably accept that.

Inconsistency
Ayew ended as Swansea's top scorer last season, but his numbers were somewhat buffered by hot streaks at the start and end of the season.

Four goals in the last three games somewhat masked a disappointing decline from being the Premier League player of the month last August.

In fairness, the same could be said for most of his team-mates in what has been a frustrating campaign all round.

THE CONS
Versatility
It isn't really much of a surprise that teams in the top half of the table are after Ayew.

The vast majority of teams in the modern game play 4-2-3-1 or a variation of it, and his ability to slot into one of the four attacking positions with ease makes a manager's life considerably easier.

Although fans came to see the diamond formation as dull, one-paced and defensive, Ayew played some of his best football as the second striker, pushing on beyond Wayne Routledge or Alberto Paloschi.

He was excellent in the big win against Everton, and outstanding in an otherwise disappointing night against Sunderland.

Ayew's great strength is in the transition from defence to attack, and Swansea would sorely miss it if he left.

The rapid counter was a feature of Swansea's good end to the season, and they'll needed it to suceed next year.

End Product
Despite a number of lean spells throughout the campaign, Ayew remains one of Swansea's most reliable performers in the opposition box.

When he arrived in South Wales last summer, most would have seen the 12 goals and six assists landed this season as a great start to his career.

Who is to say that having settled to the pace of the game here, he can't do even better next year?

Like Gylfi, he is someone who you also feel could take his game to the next level with a top class striker to bounce off and around.

PHIL'S VERDICT
My hope is that Andre Ayew stays and gets the opportunity to play more often in an advanced, central position.

When Francesco Guidolin first took over, he played a high intensity 4-3-3 that saw Everton unravel.

Ayew, springing from the right wing to help Routledge press the centre-backs, was brilliant.

The biggest strides Swansea could make next season are in implementing that high press on a regular basis, and continuing to improve the speed and potency of their counter-attacks.

Ayew will be absolutely crucial to both.
If the takeover progresses as planned, it would be a great statement of intent to make Ayew, Sigurdsson and a new striker the trident at the head of a more positive Swansea team.

Mind you, should someone offer something near £20 million, all bets are off.