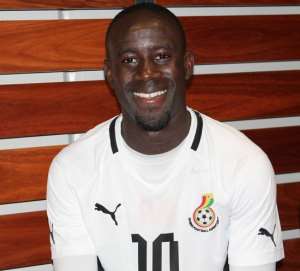 By Rahman Osman
Follow Rahman on Twitter @iamrahmanosman
Ghana winger Albert Adomah has heaped praise on ex-captain Stephen Appiah for his maturity in calming down tempers in camp during their “chaotic” campaign at the 2014 World Cup.

There was disquiet in camp caused by the opening 2-1 defeat to USA and the delay in unpaid appearance fees.

Reports of player indiscipline heightened and duo Kevin-Prince Boateng and Sulley Muntari sacked from camp prior to the final Group G match against Portugal.

According to Adomah, who was making his tournament debut, there was high tension in camp and it took former Fenerbahce and Juventus to psyche players up.

“It was an easy situation in camp but I think Stephen Appiah handled the issue very well,” the Middlesbrough star told GHANASoccernet.com

“The final day of training it took him to go room by room to urge us to at least come out to train and the response from the players was great I must admit.

“It's an experience of a life time and the least said the better, others also did well but I think the decision to bring on Appiah helped a bit.

Adomah and goalkeeper Adam Lrasen Kwarasey were the first to leave camp after Ghana's defeat to Portugal.