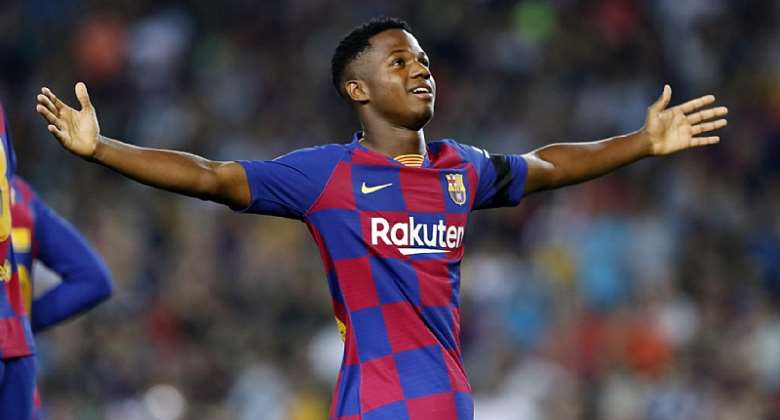 Ansu Fati has signed a new long-term contract with Barcelona.

The 18-year-old has re-signed with the club until 2027, with his new deal including a release clause of one billion euros.

He follows Pedri in agreeing a new contract at Barcelona as the Catalan Club tie down two of their most promising young stars.

Fati has scored 15 goals in 47 Barcelona games, and last year became Spain's youngest ever goal-scorer when he netted against Ukraine while still a 17-year-old.

Born in Guinea-Bissau, Fati has been at Barcelona for nearly a decade and took the number ten shirt from the departing Lionel Messi this summer.

He has scored twice since returning from a ten-month injury lay-off in late September.

"He's a young player with a lot of quality and one of those who should shape the future of the club."

With midfielder Pedri now also under contract until 2026 and with a similarly prohibitively large release clause, Barcelona have secured two potential future mega-stars as they look to solidify their strategy after Messi left the club for Paris Saint-Germain.

It has been reported that Gavi is lined up to be their third building block, with discussions underway over the 17-year-old's own long-term contractual situation.

The midfielder became the youngest player to represent the Spanish men's national team when Luis Enrique gave him his debut during the Nations League finals.

Park your car if you don't want to be vaccinated — Dr John N...
51 minutes ago