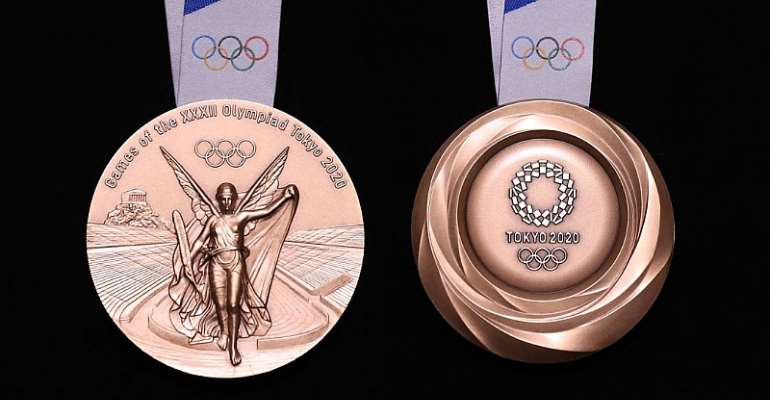 After he won the bronze medal at the African Olympic Qualifiers in 2019 in Dakar, Senegal, Samuel Takyi promised his fans that he will go to the 2020 Tokyo Olympic Games and come home with a medal.

Truly, the 20 years old chap has made it bigger. He nearly entered the final of the 57kg Featherweight division had it not been unfair officiating at the Kokugikan Arena.

In an exclusive interview with Yours Truly, he said he was content and excited to go to Accra with an important medal on his neck.

Samuel Takyi did it in style, as the only African boxing medalist at Tokyo2020. The only other African with the chance of a medal, Algeria's Imane Khalif was eliminated in the quarters of the women's lightweight division. She lost a shutout 5:0 to Ireland's Kellie Harrington.

His success ended Ghana’s 49 years gap for an Olympic boxing medal after Prince Amartey won the bronze medal at Munich 1972.

The fact also remains that Ghana’s last Olympic medal was a bronze by football at the Barcelona 1992 games.

Takyi’s medal will be the fourth at the biggest sports festival for Ghana in the boxing event, as he joins the eminent group of Clement Quartey – 1960 - Silver, Eddie Blay – 1964 - Bronze and Prince Amartey – 1972 – Bronze, as the only men to have won Ghana individual Olympic medals.

In boxing at the Olympics, both losing semi-finals are awarded bronze medals, meaning Takyi will get a medal irrespective of the outcome of his semi-final fight.

The Atukpai born rising superstar started slowly in his semi-final bout just like in his quarter-final fight against Colombian Avila Sagura, but the experienced American Duke Ragan used a few tricks in the game to win the first round.

Skilful Takyi reconvened in the second round, but the youngster was caught multiple times by Ragan in a brawly third round where neither boxer controlled.

The judges scored the fight 4-1 in favour of the American, ending Takyi’s and Ghana’s dream of a first-ever gold medal, but ultimately still a legendary journey for the boy who is now based at Korle Gonno, in Accra.

Back at the Games Village, he said the referee was aiding the American who kept fouling him, but he (Takyi) was rather warned severally.

According to the Ring Warrior, his opponent was shivering throughout, while he also wanted to exhibit his skills, but it did not work and the verdict was given to the American. He pledged to meet him again to revenge.

“However, I am happy to take something home, and I am glad to be an Olympic Medalist which I promised my family and friends” he expressed.

The fight was watched by the ANOCA President Mustapha Berraf, the Ghana Olympic Committee (GOC) boss, Ben Nunoo Mensah and Mohammed Sahnoon the Secretary-General of the GOC. All top officials commended Takyi’s brilliance and wished him a fruitful future.

She even wears knickers to wash in the compound — Takoradi w...
44 minutes ago