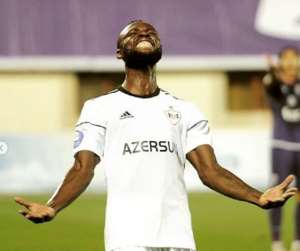 Ghana forward, Kwabena Owusu has expressed his delight after scoring his debut goal in the Uefa Europa League.

The forward was in action for Qarabag FK on Thursday night and found the back of the net in a game against Villarreal.

Unfortunately, the equalizer only served as consolation with late heroics from Paco Alcacer handing the Spanish La Liga outfit a 3-1 win at the end of the 90 minutes.

Speaking to Hot FM today, Kwabena Owusu shared his excitement to scoring his first Europa League goal while noting that he hopes the team bounces back from the defeat in the next game.

“I was happy when I scored against Villarreal yesterday but we couldn't win. I hope we will bounce back and I pray that after the Europa league competition I will get offers and come back to the black stars of Ghana”, the Ghana forward said.

Next up for Qarabag FK in the Europa League, the Azerbaijani side will take on Sivasspor from Turkey in the 3rd Group I encounter.