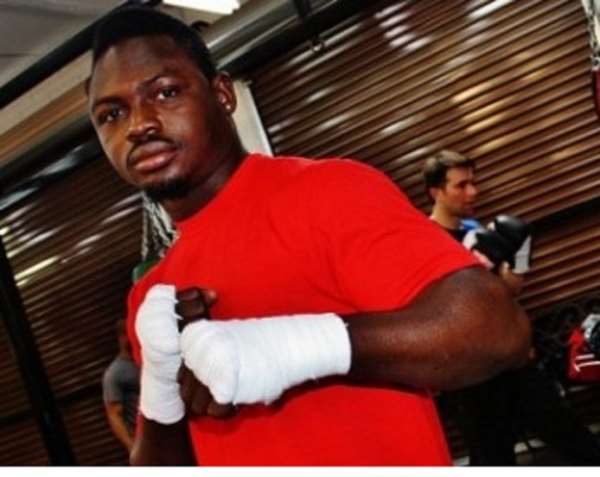 Hard-hitting undefeated Ghanaian light heavyweight boxer, Bastie Samir, is famished for a world title and believes the crown can land home in 2021.

Now 31, Bastie – popularly known as the ‘Beast’ says time is flying away so fast and cannot wait to accomplish his dream.

“Time is running out for me and I can’t wait any longer; Ghanaians too can’t continue to hang on,” he said.

The ruthless Beast began training individually this week ahead of a couple of engagements lined up before the end of the year.

Government on Sunday eased restrictions on individual and non-contact Olympic sporting activities, thus, lifting its ban with immediate effect. However, no team events are permitted.

“For now, team sports remain banned because of COVID-19. I’m hoping that by the end of July next month, the pandemic would have subsided and the ban on team sports like boxing lifted.

“However, I think it’s important to be in good shape and keep the dream intact. That’s why I have begun an intensive individual training – with the guidance of my trainer Ofori Asare – all in a bid to put myself in a ‘killer’ position,” Bastie, (18-0, 1, 16Kos), asserted.

The indomitable pugilist caused a hoo-hah in Ghana’s breathless boxing scene on October 21, 2017, when he brutally kayoed then-undefeated Braimah Kamoko (Bukom Banku) in the seventh round of their non-title cruiserweight bout at the Bukom Boxing Arena, in Accra.

His next fight crawled in on February 24, 2019, at the same venue when he handed Lokossou Raoul of Benin, a crushing round-two knock-out in an international catchweight contest. Another round of ‘brutality’ was to be unleashed on Boxing Day December 26, the same year, after callously battering Nigeria’s Sunday Ajuwa in the second round to clinch the PBC Intercontinental light heavyweight belt.

Bastie told the Times Sports yesterday that he would be engaging cruiserweight boxer Ayittey Powers and super middleweight Charles Adamu in some warm-up fights, “hopefully ahead of a World Boxing Organisation (WBO) Global title shot, by next year.”

“The COVID-19 pandemic has really been a bother. It has destabilised most of my plans, but let me be quick to say God knows best.

“Importantly, I’m focused and have my eyes fixed on the ultimate prize,” he added

High Court shoot down Agordzo's application to travel
36 minutes ago

ASEPA to file RTI request for minutes of Justice Dotse-AG 'S...
36 minutes ago