Tree diseases can change entire landscapes and must be taken seriously 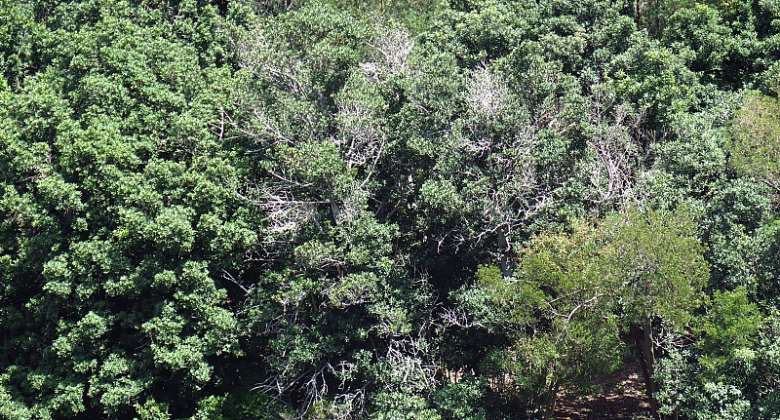 On New Year's Eve 2018, an arsonist started a fire in Betty's Bay, a small town in South Africa's Western Cape province. The fire consumed more than 12 000 hectares of vegetation, most of it mountain fynbos. Fynbos is a type of species-rich vegetation characterised by the presence of restios, ericas (heaths) and proteas.

In the wake of wildfires, fynbos regrows and proliferates. Unfortunately, the beautiful Cape Beech (Rapanea melanophloeos) trees in and around Betty's Bay are not so lucky. The trees that weren't consumed in the fire are now being steadily wiped out by a canker disease caused by a fungus called Immersiporthe knoxdaviesiana .

Immersiporthe knoxdaviesiana is a close relative of Cryphonectria cubensis, the fungus that causes the notorious Chestnut blight disease . This disease has virtually wiped out the American Chestnut tree on the eastern seaboard of the United States. The disease first appeared in New York in the early 1900s and has changed the landscape of hundreds of square kilometres. Cape Beech trees in South Africa are not nearly as plentiful as Chestnut trees; in fact, they are already considered as declining in the wild due to bark harvesting for medicinal use.

Cape Beech trees are a key component of fynbos riparian forests, of which the Kogelberg Nature Reserve near Betty's Bay contains pristine examples. Apart from their medicinal value, they are one of only a few tree species found in these riparian forests. Without them the integrity of the canopy and the riparian ecosystem would be compromised. So their absence in the already drought-stricken fynbos floristic region would be a cause for concern. In their place, we may see an increase in invasive, thirsty Australian acacias that will make it harder for other plant species to survive.

It is also not known whether the fungus killing the Cape Beech trees could cause disease on other species in the genus, or even if it can jump from this host to other trees in the region.

Some may question the value of knowing about this disease. So what if a few thousand trees die? What can we do about it anyway? The simplest answer to these questions is that knowledge is power. In this case scientists now know that many of these trees will die but we can try to slow down the spread of the fungus to other areas. And while this is done, researchers can start to understand whether the fungus will attack other plants and consider ways in which this fungus can be stopped from permanently changing South Africa's fynbos landscapes.

Immersiporthe knoxdaviesiana was first noticed in the early 2000s in the Harold Porter Botanical Gardens , in Betty's Bay. The discovery came purely by accident during lead author Mike Wingfield's vacation visit to this wonderful garden. Some trees were dying. Regular visits to the garden, including those for collections that led to the discovery of the fungus causing the disease, have shown that the problem is worsening with time.

Researchers at the University of Pretoria have an ongoing collaboration with the SA National Biodiversity Institute (SANBI), which manages this and other botanical gardens in the country. Given this connection, the DST/NRF Centre of Excellence in Tree Health Biotechnolog y, housed at the university, was called in to examine the trees and determine what was happening. A tree damaged by the canker. Mike Wingfield

For the present, and with declining sources of funding, it is possible only to monitor the situation. But when team members of the Centre of Excellence visit other areas where Cape Beech trees grow, they always inspect the trees to check whether the fungus is spreading to new areas. This appears not to have happened yet.

It is unknown where fungus causing the canker disease on Cape Beech trees originated. The level of devastation suggests that it could be new to the area, and perhaps even to South Africa. This would be much like SARS-CoV-2 causing COVID-19, where a novel pathogen encounters a naive host – in this case a tree and not a human.

An alternative hypothesis is that this is a native pathogen that has been positively influenced by a changing environment. We favour the former view but hope to sequence the genome of the pathogen, to produce genetic markers for it and so to determine its likely origin. Such knowledge will help to devise control strategies for the disease and to prevent similar problems from arising in the future.

Plant pathogens are a serious threat to global food security. In fact in December 2018, the United Nations General Assembly declared 2020 as the International Year of Plant Health . Farmers typically combat plant pathogens by spraying fungicide. A huge effort goes also into breeding varieties that are resistant to plant pathogens to sustain agricultural systems worldwide. Such options are not possible for trees in native woody ecosystems such as in the case of the American Chestnut and the Cape Beech.

Plants like the Cape Beech trees don't contribute directly to food security: their components can't be eaten or farmed for agricultural use. So they are seen as less valuable and their survival perhaps less important.

However, while their value can't be immediately read as economic, these plants play a crucial role in a delicate ecosystem. If Cape Beech trees or in fact other native tree species are wiped out, that whole ecosystem shifts.

The ecological implications are enormous and typically underestimated. Other than contributing to the air we breathe and to a source of water, not to mention providing shade and beauty, trees are deeply interlinked with other plants, animals and microorganisms. When species disappear from their natural environment, many other species are lost, never to be seen again.

This is why it's essential to understand the impacts of different pest and pathogens so that these can be managed – and potentially, in future, stopped using technologies that haven't yet been discovered.

Brenda Wingfield receives funding from NRF and South African Forestry Industries. She is vice president of the Academy of Science of South Africa and the Secretary General of the International Society of Plant Pathology.

Casparus J. Crous does not work for, consult, own shares in or receive funding from any company or organisation that would benefit from this article, and has disclosed no relevant affiliations beyond their academic appointment.

Hottest Photo Reports
Catch up with all the political quotes from our politicians.
Advertise here
More Article
ModernGhana Links
Thoughts Of A Nima Boy: A Break From The Past, Jariya Yussif Writes
Rejected And Approaved: Is Our Democracy In Crisis? Some Political Marketing Perspectives
Disinformation: An Emerging Threat to Ending AIDS in Ghana
Abolish 1999 Constitution, Implement #endsars Reports For Peace To Reign
Road of Death: Would the Ghanaian Parliament pass on an opportunity to fix the Accra–Kumasi Highway?
The Argument About Which Teacher Union Was Formed First
Turkey And Bangladesh Can Benefit from Growing Trade and Strategic Ties
National Science And Maths Quiz (NSMQ): The Bigger Picture
Why Ghana needs robotics industry for national development
TOP STORIES