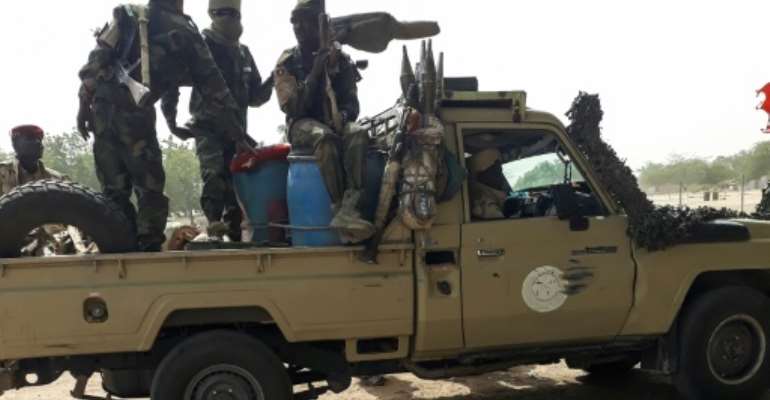 No more foreign missions. By - (AFP)

Chadian President Idriss Deby Itno has said his country's troops, who have been deployed to fight jihadists in the Lake Chad region and the Sahel, will no longer take part in military operations outside national borders.

"Our troops have died for Lake Chad and the Sahel. From today, no Chadian soldiers will take part in a military mission outside Chad," he told national TV in Arabic on Thursday. His remarks were broadast in French on Friday.

His remarks coincided with the end of a major offensive by Chad's armed forces against Boko Haram jihadists but also frustration at perceived failures by allies to do more in the fight.

On Thursday, the armed forces said they had wound up an operation against Boko Haram in the Lake Chad region, saying 52 troops had been lost and a thousand jihadists killed.

That operation was launched after 98 Chadian troops were killed in a Boko Haram raid on a base at Bohoma in the lake's marshlands on March 23 -- the biggest one-day military loss in the country's history.

Lake Chad is a vast body of water where the borders of Niger, Nigeria, Chad and Cameroon meet.

Its western shores have been hit by jihadists crossing from northeastern Nigeria, where Boko Haram launched a bloody campaign of violence in 2009.

The implications of Deby's remarks for Chad's wider military involvement were not immediately clear.

The four countries bordering the lake on 2015 set up a formation called the Multinational Joint Task Force (MNJTF), also including Benin, to fight Boko Haram.

But Chad, whose armed forces are relatively prestigious in the Sahel, has shown frustration with the MNJTF following the Bohoma losses.

"Chad is alone in shouldering all the burden of the war against Boko Haram," Idriss publicly complained last weekend.

In announcing the end of the offensive on Thursday, the army said its troops had expelled jihadists from Chadian soil and had advanced deep into Niger and Nigeria.

Deby said that he had warned those countries that his forces would move out of bases seized there from the jihadists by April 22, regardless of whether their armed forces moved in or not.

Chadian troops are also part of the so-called G5 Sahel force -- a French-backed scheme to pool 5,000 troops from Burkina Faso, Chad, Mali, Mauritania and Niger to roll back jihadism in the Sahel.