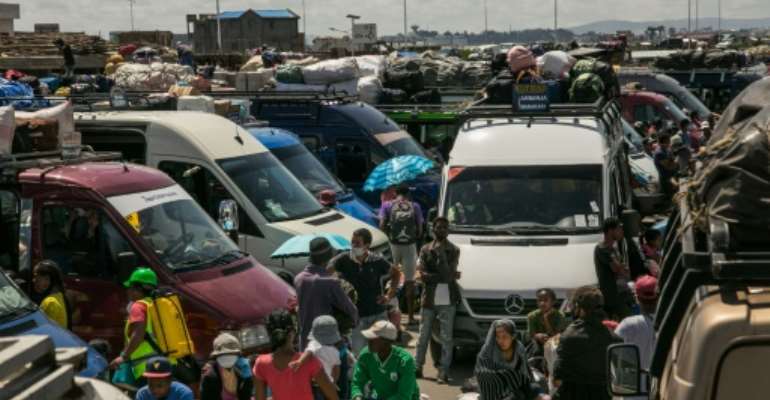 Malagasy rush to flee the capital after the government temporarily eased travel restrictions. By RIJASOLO (AFP)

Hundreds of Malagasy on Tuesday elbowed their way onto minibuses bound for the countryside, ignoring bans on group gatherings and outings after the government extended an anti-coronavirus lockdown but temporarily eased travel restrictions.

"All I want is to go back to my home," said pensioner Delila Razanamandimby as she struggled through the crowd at a bus station in the capital Antananarivo.

"I would rather die in my native village than die here."

Like most of his African counterparts, President Andry Rajoelina placed Madagascar's two main cities under a 14-day lockdown on March 22 in a bid to halt the spread of Covid-19.

The order went largely unheeded by Malagasy citizens and the number of infections continued to creep up, prompting Rajoelina to extend the lockdown by another 15 days on Sunday.

Health workers took temperatures of the passengers before boarding. By RIJASOLO (AFP)

The Indian Ocean island-nation has recorded 88 cases of coronavirus so far, and Rajoelina warned that going back to normal would make it difficult to curb the outbreak.

But the president also lifted a ban on public transport for three days and allowed urban residents to "head back to the village" -- preempting another rural exodus after hundreds fled to the countryside following his first lockdown announcement.

Antananarivo's Andotapenaka bus station was in disarray early Tuesday morning as people flocked into the building, pushing and shoving with little concern for social distancing.

"It was complete chaos because only one gateway was open," said 29-year old engineer Florent Tsimosara, eyes wide with fear as he recalled the experience after eventually managing to get his family on board.

"It scared us because all the people were stuck close to each other and we don't know if anyone was sick," he added.

Antananarivo's Andotapenaka bus station was in disarray early Tuesday morning as people flocked to the building. By RIJASOLO (AFP)

Officials on site were swamped by the crowd and rapidly gave up checking the exit permits citizens had been asked to fill in beforehand.

"There were so many people this morning that we hand to change our strategy," admitted Transport Minister Joel Randriamandranto, who had come to make note of the situation.

"We cancelled the individual exit permits and registered passengers in groups," said Randriamandranto, adding that the aim was to "ensure traceability".

None of the passengers were tested for COVID-19.

Only their temperature was taken before boarding, after which they were ceremoniously handed a mouth cover and hand sanitiser donated by an association founded by First Lady Mialy Rajoelina.

Yet the high risk of infection did not seem to stop the frantic travellers, determined as ever to reach their destination.

"Someone told me the virus cannot stand heat, so I sent my wife and children to Mahajanga (in the north), where it is hotter than Antananarivo," said Tsimosara as he pushed his way back though the crowd.

"Here in the capital, no one respects the minimum one-metre distance."