Fumigation Exercise Takes Off In Tarkwa Markets And Lorry Stations 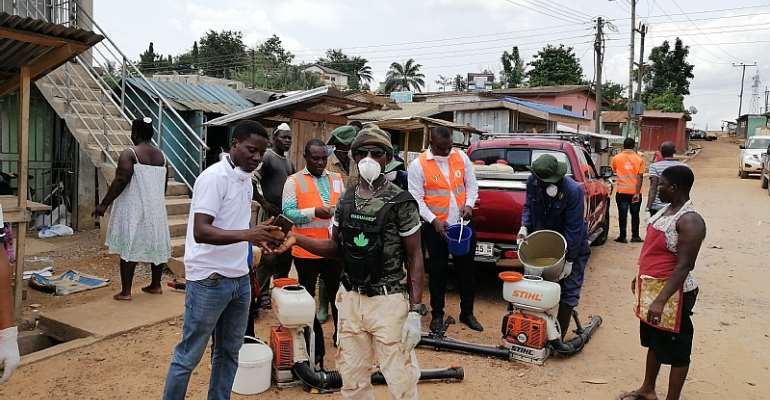 The Tarkwa-Nsuaem Municipal Assembly, (TNMA) has commenced two-day fumigation of local markets and lorry stations Municipal wide as part of efforts outlined to combat the spread of Corona Virus in the country.

The exercise forms part of a national fumigation exercise being led by the Ministry of Local Government and Rural Development, (MLGRD) which is in line with the President's directives on measures outlined to contain and prevent the spread of Corona Virus in the country.

Hon Gilbert Ken Asmah, the Municipal Chief Executive (MCE), for Tarkwa-Nsuaem Municipality who led and monitored proceedings, expressed utmost satisfaction at progress made so far with the exercise, and commended the market women and transport operators for complying with the directives for uninterrupted exercise. "I am highly pleased with the spirit of patriotism exhibited by the people towards the exercise specifically markets women, Shop owners, drivers and the public for the adherence to the directives and support in kind for a successful exercise" he mentioned.

Hon Asmah explained that the markets, lorry stations and shops after undergoing the exercise, would be opened to business after 24 hours.

The MCE hinted further, that the disinfection which mainly seeks to halt the spread of the virus would also ensure a strict hygienic environment for the traders and drivers too.

The Tarkwa-Nsuaem MCE entreated his people to periodically practise personal hygiene and frequent washing of their hands under running water, the use of hand sanitizers frequently and also minimise human contacts to prevent the disease from spreading.

According to him, It was prudent for all to adhere to the precautionary advice being outlined by health professionals and together, we can fight the deadly virus in our Municipality and country wide, he stressed that social distancing must always be observed to stop the spread of the virus, he added.