Tribute to Manu Dibango: Cameroonian jazz pioneer loved across Africa and the world

By Rogers Orock - The Conversation 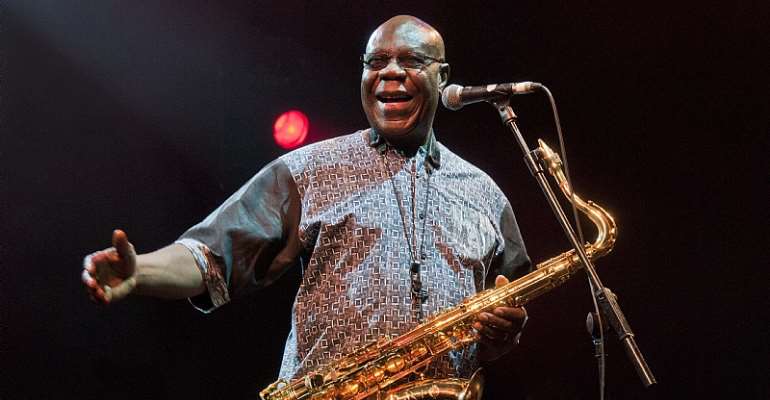 African jazz has lost another of its best-known icons.

Emmanuel N'Djoké Dibango, popularly known as Manu Dibango , was, like Hugh Masekela who died last year, a global star of Afro-jazz and funk.

The saxophonist Dibango leaves a huge legacy spanning more than 60 years of musical production that will continue to echo in global music. His brand of Afro-jazz drew enormously from makossa , a genre of popular music invented in the 1950s in Cameroon's major economic and cultural centre, Douala. The music blended Afro-Cuban rumba and local musical forms such as assiko and ambasse bey with other styles such as the Congolese soukous .

Tellingly, one of Dibango's most successful albums is titled Soul Makossa (1972), with a title song that has been repeatedly sampled (though most often unacknowledged) by stars ranging from Michael Jackson to Rihanna, Kanye West and A Tribe Called Quest. This one track alone has been referenced by so many globally famed artists that it has infused the pop culture zeitgeist from dance floors to catwalks at various times over the decades.

Dibango's work has resonated with so many of his peers and audience because of its eclectic and ecumenical character. The richness of its multiple sources of inspirations across a wide range of traditions was only enhanced by Dibango's deft ability to combine and recompose them into new symphonies and rhythms.

In an interview in 2018 for Quincy Jones' Qwest TV, he spoke about his life and musical journey, moving between jazz, rumba, funk, and reggae, crossing paths with Sidney Bechet, Quincy Jones, Herbie Hancock, Bob Marley and Mohamed Ali along the way.

In Africa, Dibango's appeal as an artist stemmed not only from his great talent, but also his simple ability to work with artists across a wide range of generations and backgrounds to advance African music and social causes on the continent. He famously led a humanitarian effort to raise money for the fight against famine in Ethiopia through a number of initiatives, including a charity record, Tam-Tam for Ethiopia (Drum for Ethiopia) in 1985. Manu Dibango performs Soul Makossa live at the Koroga Festival in Kenya in 2016.

Personally, I have been drawn to how Dibango's brand of music speaks to the political aesthetics of everyday life in authoritarian settings, much like Kuti's. This includes a resilient capacity to laugh and be joyful, a determined refusal to capitulate to violent oppression. This is what Kuti described as “suffering and smiling”.

Dibango's music was not directly about political commentary in its lyrics, except for a few songs like Ah! Freak Sans Fric (Africa Without Money). The song bemoaned a continent impoverished despite its natural wealth. But in its poetry of everyday life on the continent, Dibango's music addressed the aesthetic, ethical, political, economic, material and even the psychological states of Africa in the wake of the multiple crises that people have had to live through.

Born in 1933, Dibango left Cameroon in his teens to undertake high school studies in Paris. From this moment on, his life as a world journeyman and musical joy maker began. He aptly defined himself as a “Negropolitan”, an African of the world.

He never really returned to Cameroon. His occasional efforts to initiate cultural projects to promote music in the country were frequently frustrated by the political establishment.

As Francis Nyamnjoh and Jude Fokwang, two notable Cameroonian anthropologists, wrote in their seminal study of Cameroonian music and the repressive order in the country, Manu Dibango's genre of makossa

but his efforts to

There was therefore no love lost between the musician and the authorities in the country of his birth. No surprise, then, that there was no credible public statement from either the president of Cameroon, Paul Biya, or from the country's Ministry of Culture in the days after the announcement of the death of this cultural icon.

No leading national authority had called for the public to honour Manu Dibango's memory and to recognise his cultural contributions to uplifting the national spirit of joy and resilience in the face of everyday hardships that Cameroonians endure.

This stands in stark contrast to the global outpouring of grief and celebration of this cultural genius at the news of his demise. Dibango was an object of “Cameroonian and African pride”, as N'dour puts it.

Dibango passed away in Paris after contracting COVID-19. He was 86 years old.

Rogers Orock does not work for, consult, own shares in or receive funding from any company or organisation that would benefit from this article, and has disclosed no relevant affiliations beyond their academic appointment.

By Rogers Orock, Lecturer, University of the Witwatersrand