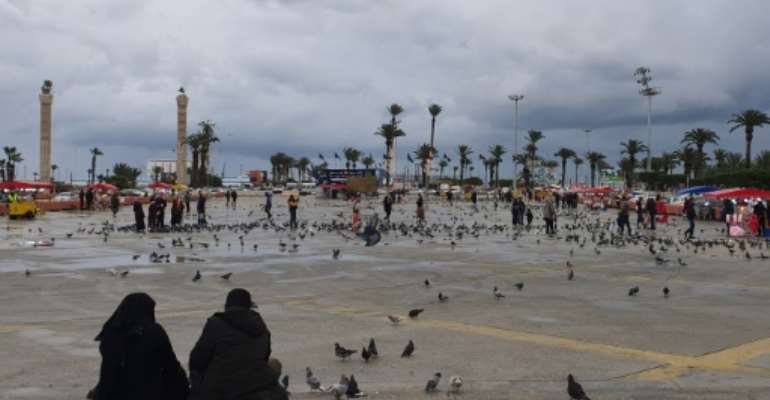 The Tripoli-based Government of National Accord (GNA) announced a night-time curfew starting Sunday in areas under its control to prevent the spread of the novel coronavirus. By Mahmud TURKIA (AFP)

Libya's UN-recognised government declared a night-time curfew and closure of public spaces starting Sunday to keep the novel coronavirus out of areas it controls, while fighting continued south of the capital.

It also ordered the closure of restaurants, cafes and party halls and banned funeral and wedding ceremonies.

Libya, which has been mired in chaos since the 2011 overthrow of longtime dictator Moamer Kadhafi, is divided between forces loyal to the GNA and those of Khalifa Haftar, a military commander who backs a rival administration in the country's east.

Pro-Haftar forces -- who in April launched an assault to seize Tripoli where the GNA is based -- imposed their own nightime curfew on Thursday in areas under their control.

Libya has not recorded any cases of the COVID-19 disease, but experts fear an outbreak could be catastrophic due to the country's degraded health system.

UN chief Antonio Guterres on Saturday joined those expressing concern and urged both GNA and Haftar forces to observe a truce in their deadly fighting in and around Tripoli.

"Given the already dire humanitarian situation in Libya and the possible impact of the COVID-19 pandemic, the Secretary-General calls on the parties to join forces to address the threat and to ensure unhindered access of humanitarian aid throughout the country," a statement said.

A fragile truce entered into force on January 12, but fighting has continued with each side blaming the other for starting it.

Earlier this week the GNA and Haftar's forces welcomed calls for a humanitarian pause in the fighting made by the UN and several countries, although the GNA said it reserved "the right to respond to daily assaults targeting civilians and public facilities".

The UN statement said Guterres hopes the "positive" responses by the warring sides in Libya "will be translated into an immediate and unconditional cessation of hostilities... (and) a lasting ceasefire".

Since April last year the fighting has left more than 1,000 people dead and around 150,000 displaced.

Five women were killed on Wednesday in strikes carried out by pro-Haftar forces, according to the GNA, while on Saturday sporadic bombardment could be heard from the centre of Tripoli.