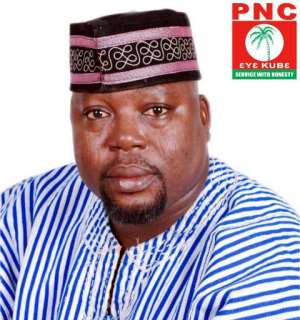 Mr Samson Asaki Awingobit, a PNC flagbearer hopeful, has described as a misplaced priority government allocation of a US$100 million fund towards the fight against Coronavirus.

According to him, part of the US$100 million fund could have been injected into local manufacturing companies to produce goods and services that were being imported from China and other countries hit by the COVID-19.

He said the move will help Ghanaian importers of such goods and services, whose businesses have been affected by deadly virus fell low impact.

He averred that government in doing so will not only prevent a potential hikes in goods and services but also address the potential collapse of many businesses.

He said this last Saturday, March 14, when he joined hundreds of mourners to pay their last respect to the late Kusasi Queen Mother, Mangazea Amina Ambilla who was laid to on Saturday.

Over hundreds of mourners who were pleased about Asaki Awingobit’s presence welcome him amid rousing cheers, with many of them calling him the future President.

Seizing the opportunity to speak to the mammoth gathering at the funeral grounds, Samson Asaki Awingobit espoused his vision of becoming the flagbearer of the PNC and subsequently the President of Ghana.

He called on Ghanaians to see the PNC as the only alternative to the NPP and NDC; the two political parties that have mismanaged the fortunes of the country.

He however pointed out that the PNC is faced with some challenges and promised to address issues of logistics and infrastructure facing the party.

Samson Asaki Awingobit also promised to ensure that the party opens regional and constituency offices across the country when elected as flagbearer, and as well provide field officers of the party with motorbikes and other means of transport and logistics to aid them in their daily duties.

He expressed confidence of becoming the flagbearer of the PNC for the 2020 elections.

He promised a new hope for the party if elected the flagbearer and believes the time has come for the party to have a new phase of leadership, which will improve the fortunes of the party and also attract more youth to its side.

He said he will reactivating the grassroots support base of the party as well as empowering party executives to also support the party at various levels.

He promised that if he becomes the flagbearer of the party, he would ensure that the structures within the party are supported to work effectively.

Some supporters said he is a marketable figure who has the exposure to pull the needed resources and support for the party, hence their unflinching support towards his 2020 bid.