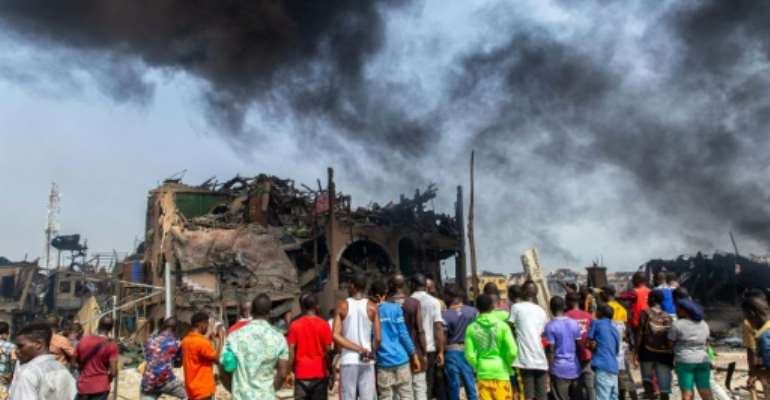 The death toll from a suspected gas explosion that tore through a residential area of Nigeria's biggest city Lagos rose to 19 on Monday as emergency services dug bodies from the debris.

The blast next to an oil pipeline destroyed buildings, lorries and cars as it tore through a residential area of the sprawling city on Sunday.

An AFP reporter at the scene on Monday saw two bodies that were pulled out from the debris of a collapsed building by an excavator raising the death toll to 19.

Rescue officials told AFP they would work wih residents of the area to conduct a house-to-house search for more bodies.

The government had earlier said 17 bodies were recovered and that 25 people were being treated for injuries.

"Efforts are on to determine the cause of the explosion that has left many homeless," the Lagos state government wrote on Twitter.

The incident happened at around 8:00 am (0700 GMT) on Sunday and destroyed around 50 buildings in the residential district of Abule Ado.

The state-owned Nigerian National Petroleum Corporation (NNPC) said preliminary indications showed the initial blast was caused by a truck that "hit gas bottles stacked up in a gas processing plant".

"The impact of the explosion was so huge that it led to the collapse of nearby houses and damage to an NNPC pipeline," the company added.

Managing Director Mele Kyari said a fire spewing from the pipeline was put out late Sunday and maintenance crews were working to fix the damaged section.

Lagos state government said "secondary explosions occurred at the location of the fire and caused significant damage to multiple buildings", razing a church and hitting the domitory of a girls' school.

The grieving residents bemoaned their fate and called on the authorities for assistance.

"We appeal to the government to come to our aid because apart from losing many of our people, some of us have been rendered homeless," resident Femi Ekundayo told AFP.

Pipeline and tanker truck explosions are common in Nigeria, where most people live in poverty even though the country is the biggest producer of oil on the continent, with around two million barrels per day.

Some incidents happen when residents try to siphon off oil or petrol from pipelines or when tanker drivers have accidents on the country's ill-maintained roads.