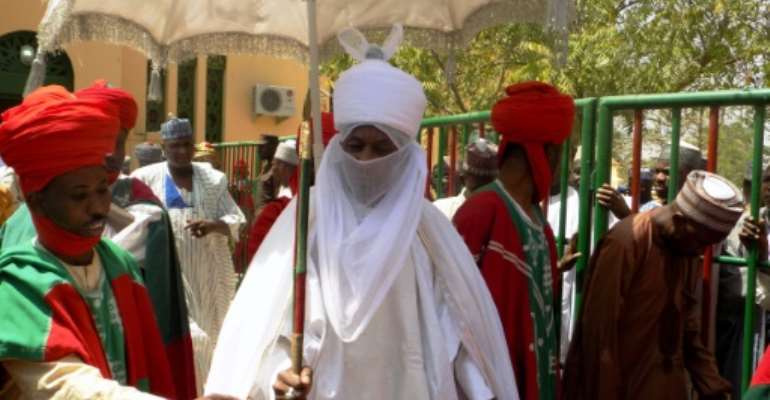 An outspoken ruler mired in conflicts is ousted without warning from his palace and banished under armed guard into an uncertain exile beyond the borders of his realm.

This is not the plot of a Shakespearean tragedy, but the real-life drama that has played out in northern Nigeria's influential Islamic emirate of Kano as traditional leader Muhammadu Sanusi II was unceremoniously deposed by the local governor.

The sudden fall of one of the country's most revered hereditary rulers on Monday rattled the 1,000-year-old kingdom -- and has shown the difficult balancing act facing the ancient monarchies of modern-day Nigeria.

Sanusi, also known by his birth name Lamido, had been a mould-breaker since ascending to the throne of the emirate of millions in 2014 after the death of his great-uncle.

The 58-year-old former central bank governor was already known for his outspokenness when he claimed the title and carved out a reputation as a moderniser willing to criticise practices like having multiple wives and children without being able to support them.

He was also not afraid of taking on the powerful politicians running northern Nigeria -- lambasting them for leadership failures.

"It's no secret that many of our political leaders are inept and not well educated," the emir wrote back in 2017.

"Nigerians have learnt from experience not to expect much from them."

The ruler's main nemesis -- and the man who ultimately unseated him -- was regional governor Abdullahi Ganduje.

Ganduje suspected the emir of backing his political rival and had already divided up his territory and launched a corruption probe to try to bring him to heel.

On Monday their feud came to a head when Sanusi was unexpectedly removed for "total disrespect".

The deposed ruler was detained by police at his palace, pictured, before being taken to exile in a remote village in another state. By PIUS UTOMI EKPEI (AFP/File)

"The governor decided that enough is enough and moved against him," said Adewunmi Falode, a history professor at Lagos state university.

"It's a signal that the ultimate power rests with the government while the emir is just a symbol of spirituality, culture and tradition without real power and influence."

The deposed ruler was detained by police at his palace before being spirited out of Kano to exile in a remote village in another state where he is expected to remain incommunicado.

There are dozens of traditional rulers across Africa's most populous country.

They have no official constitutional powers but are important cultural custodians who often wield great influence over their followers.

Relics from a period when monarchies dominated this region, they rely now on regional governments for their funding and their succession is regulated by elected officials.

While they lack practical power, their patronage can be key at elections when Nigeria's notoriously cutthroat politicians jostle for votes.

But their role remains ambiguous -- and when Sanusi began to talk up some complained that he was overstepping the boundaries and flouting the strict protocol of the palace.

"It is an established custom that the emir should be seen not heard," a Kano court insider told AFP on condition of anonymity.

The decision to detain and banish Sanusi to an undisclosed location proved controversial. By AMINU ABUBAKAR (AFP/File)

"But Sanusi violated that important tradition and would talk like a parrot anywhere, anytime and on any topic -- this eroded the mystic and prestige around his person in the eyes of the people."

That could in part explain the muted response to his removal on the streets of his former kingdom.

While moves to depose previous emirs provoked deadly violence in decades past, this time around there have been no major protests.

If anything highlighted the uncomfortable divide between modernity and tradition that the monarchies straddle -- it was the nature of Sanusi's removal.

The lightning move to turf him out was down to a powerplay typical of the political tussles of contemporary Nigeria.

Within hours a replacement had been installed -- and the former ruler released a video message pledging his allegiance.

But the decision to detain and banish Sanusi to an undisclosed location proved controversial.

The tactic dates back to the days when the British Empire dominated Nigeria with its strategy of divide-and-rule and would exile leaders viewed as troublesome.

"The archaic practice of banishment of deposed Emirs, a colonial practice, has no basis under Nigerian law or the constitution," Abubakar Balarabe Mahmoud, a lawyer for Sanusi, said in a statement.

His legal team insisted they would go to court to challenge the legality of his treatment.

"We are totally perplexed at the resort to this practice in present day Nigeria by its political leaders."