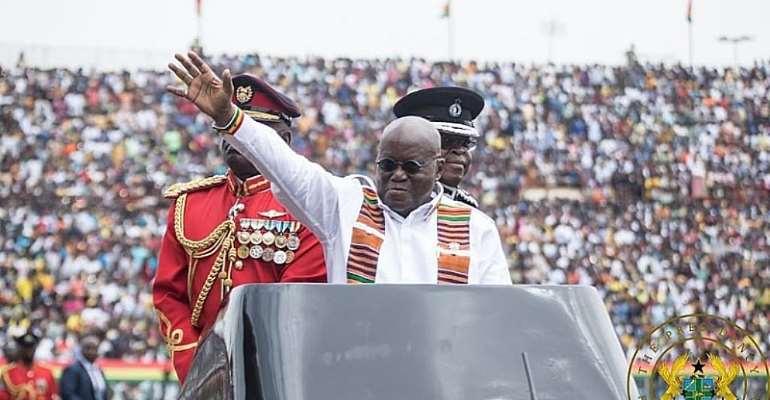 Ama Ghana woke up with a huge hangover from the celebrations of her 63rd birthday. Hangover what?..she thought, as the elaborate preparations pretentious and overbloated with misplaced priorities in crucified budget lines played before her eyes.

She had quietly borne the discomfort she had felt in the disunified front of leaderships paraded together with the rituals of flag bearing school children, workforces, servicemen and dignitaries. A show of her might, glorified existence of repetitive trooping of colours since her independent birth?

She belched softly and could not help the nauseating smell of the perfumed Thai rice, the perfumed mineral water... She had long given up alcohol since her 60th birthday of drunkenness and debauchery behind the lenses of her impoverished majority. She threw up so much with the guilt of glutinous privilege of her leadership.

Imported champagne was swished about in imported flutes in a shocking indifference to the modest celebrations of beer, palm wine and apios of the bars, homes and under the trees of the common people.

Every year since she had witnessed the near revulsive excesses of her leadership in different mutations of her governance and administrative machinery; she belched again and stretched out to the bottle of antacids in her medicine bag.

At 63, her health check was as good and as bad as the hopeful helplessness that plagues her aspirations of dreams faded or fast fading. Her belch smelt of what she had eaten the night of her birthday or maybe what she has been fed her by her leadership and people for 63 years.

She remembered the words of her dietician, you are what you eat and drink. At 63 what has her leadership fed and watered her with?

She winced at the fact that after her son Kwame, it had been all at sea - leaderships paying lip service and no one understanding that without the solid roads and infrastructure that are the hardware every software sits on, she can hardly start to develop and consolidate any gains.

She squirmed in memory of the politically expedient speech at the 63rd birthday; hardly justifying the lack of unity, continuity and inclusiveness that could have given her some sound sleep in the least.

Leadership had taken a near vindictive turn. Most worrying in lessons not learnt in a discontinuity... hospitals and schools were lying uncompleted... Budget lines were still being squandered in a corruption crusade that seems unable to catch revenues and resources, defying all protection insurance policies against a public purse gradually metamorphosing into a private purse.

She squirmed at the unholy alliances of leadership and institutions around ideological and personal differences on the disquiet sides of honest critiques simmering to a slow boil of marginalization.

She noted with concern the absence of one of her recent leaderships and the copious marginalisation of his representation. When did her playing field suddenly become as uneven and at odds with the constitutional separation of powers which were preferable to the guns and veiled brutalities of military interventions she abhors and would rather be as past in her historical evolution as has been put on the back burner of her 63rd birthday celebration?

She belched again and hoped the guns of institution and governance under the control of constitutional democracy would not be employed, hijacked and employed to more lethal uses than the physical guns of military dictatorships.

She remembered the honour, dignity, peace, security, cohesive inclusiveness of tribal indifference and friendly competitiveness of her 2nd Republic and hoped it would not be derailed on an uneven playing field, this was gnawing in her discomfort of belches chasing each other in defiance of too many antacids swallowed before breakfast.

Ama Ghana let out another loud belch as she remembered how difficult it had been to read the looks on the faces of her leadership at her birthday celebrations.

All surviving past leaders but one, Chieftains represented in their most relevant face, voice and authority.

Administrative power and relevance in the near prostitution existence to governance in lame expediencies of convenience and survival.

The people as dazed as their arrested hopes and aspirations being fed more hope or assurance was also hard to read in the dizzy rush of her 63rd birthday celebrations.

A far cry from the collective spirit of hope with which her first birthday was celebrated. She picked up her bedside phone and ordered breakfast. She would have loved a breakfast of komi ker shitto with her favorite fish the Ga's called Teiokor..osormli gnor.. but changed it to light soup, green spinach soup with snails.

She was in Ashanti land and remembered the ingenuity of the government in taking her birthday to her people in the regions.

It was the north last year and Ashanti this year, tables may turn and maybe Kyebi will have to wait for Bole Bamboi or Nkronful will be remembered when the apostrophes of founder's and founders' cease their definitions of misplaced priorities long denied Ama Ghana in the pooling of her strengths in diversity.

She shuffled into the bathroom as she remembered her conversation with Lady my people will help me Malaysia. Was it her leadership or her people she thought as she ran the hot and cold taps to fill the bathtub?? Was leadership bankrupt on ideas or were the people sedated in complacencies of convenience? Was leadership cajoling and bullying with power that truly belongs to the marginalised, hypnotised and sedated majority? Was leadership in denial of the cunning and subtle stranglehold of external forces forcing us away from our homegrown and self reliance that could cure dependence and spell the celebration of independence with some generational respect?

Unity of minds and purpose in a mindset that will checkmate external and reactionary defining a people with no definitions of themselves? She remembered what Lady Malaysia had said to her as she eased herself into the warm bubble bath.."Ama..they came to us as they still come to you with their various wares..but we refused to eat, even in our extreme hunger and near starvation.

With time they realised our market place was not good for their wares; even their religion found space in a few. They love money most and will always flee from unprofitable ventures.

Ama, our spirit in a unified aspiration to change our lot for ourselves was an unspoken religion of belief God gave us to assert ourselves in the image he created us in, our own mirrors ever reflecting us.

Our leadership carried us on a journey of unified wills of equals with unified purposes to do it for ourselves. Kwame your most illustrious son tried but spoke too much to the different aspirations of your brothers, sisters and cousins too early in the rush of idealism too ambitious and impotent in translation.

We sidestepped with the cunning and guile of feigned weakness and meekness hardly akin to our undauntable will and aspirations, to slowly be ourselves and do it ourselves.

The reason I am called “Lady my people will help me Malaysia”’. She closed her eyes...she was relaxing..her stomach was settling..she kept her mind in the thinking mode..she cannot sleepwalk whilst lying in the bath..she could drown herself..she had just woken up and cannot afford to dream again during the day. Her dream of the night before now came to her..last night, Ama Ghana dreamt she got so upset when the President spoke the same words of rhetoric inaction that has had her sleep walking and day dreaming for 63 years.

We have to make a paradigm shift...we have to do things differently..."we must all be citizens and not spectators".

At that point, Ama Ghana broke protocol and took the microphone...”On my 63rd birthday, I would like to politely call on all of you..leaders, Chiefs, school children, workers, noble service men, farmers and all my children to follow me..let us all divide into groups..2 groups..first group march into town to clean and rid it of the filth engulfing us..second group march into the forest to plant trees, clear the rivers and streams. We will make sacred vows to be repeated to generations..that never again shall we abuse nature, our heritage, what sets us apart, what is our true definition as an uncompromisable inheritance.

Let us rise and the whole nation will rise with us as my wishful birthday present to be celebrated for doing things differently and us all becoming engaged citizens, denouncing our 63 years of rhetoric expediencies of sleep walking and daydreaming”.

The standing ovation resounded after her with all the colours of a well decorated and liberated 63rd birthday.. to do things differently for Ama Ghana.

In her dream, she saw Lady Malaysia giving her a thumbs up. She woke up and the reality of her discomfort came in belches that seemed to have settled in a relaxed bubble bath. The water was almost cold by the time she stepped out as hopefully helpless as ever for what the future held..for her..her people..Ama Ghana...