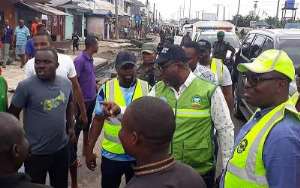 Some visiting students of Faculties and Departments of Environmental Sciences from tertiary institutions across the country have commended the Rivers State Waste Management Agency (RIWAMA) for the high level of cleanliness it has achieved in Port Harcourt, the State capital and its environs.

The students who said they were in the Rivers State capital for comparative studies on the level of cleanliness attained by the major cities in the country, said they were highly impressed by the aesthetic beauty of the city, which has once more confirmed its Garden City status.

They told newsmen in Port Harcourt on Monday, that following careful evaluation of cities so far visited, the Garden City ranked tops and charged the Rivers State Waste Management Agency (RIWAMAA) not to relent but keep up the tempo.

The leader of the team, Yahaya Amin Tanko said they spent seven days in course of their study of Port Harcourt and praised Governor Nyesom Wike for his environmentally friendly disposition, adding that the State Waste Management Agency has achieved so much success because of the support of the Governor.

“On our arrival a week ago in Port Harcourt, we had to ask questions and part of what we were told was that heaps of garbage used to litter some areas and even up to the median of some roads. But what we have seen is entirely different and we know that a lot of works is going on in RIWAMA. They should keep it up”, he said.

The team leader said his group would return to their respective institutions and use Port Harcourt as a model for projects and commentaries.

The students also commended RIWAMA for their bold step in banning cart pushers in Port Harcourt, observing that in some cities visited, cart pushers dump refuse indiscriminately on the roads with reckless abandon with little or no action taken to caution them by the government.