Suicide attackers hit outside US embassy in Tunis 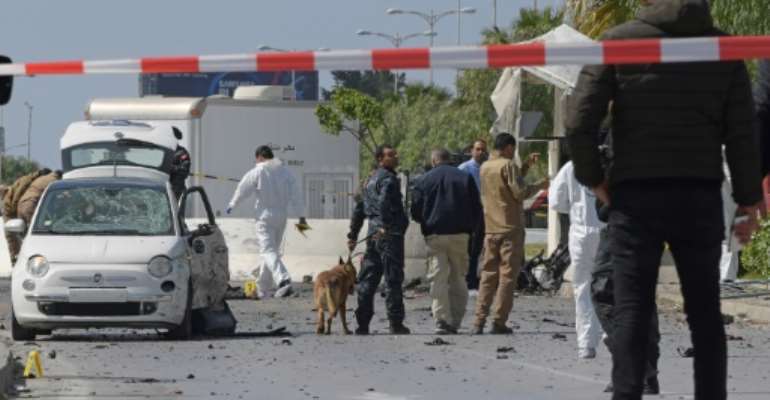 Police and forensic experts gather at the scene of a double suicide attack that targeted police near the heavily-fortified US embassy in the Tunisian capital. By FETHI BELAID (AFP)

Suicide attackers struck outside the US embassy in the Tunisian capital on Friday, killing a police officer, wounding five other people and shaking a city repeatedly hit by jihadist violence.

The latest attack comes despite a state of emergency imposed in the North African nation in 2015 following a string of bloody assaults claimed by the Islamic State group.

An explosion rocked the Berges du Lac district where the highly fortified embassy is located at around midday Friday, causing panic among pedestrians and motorists in the area.

"Two individuals targeted a security patrol... in the street leading to the American embassy," the interior ministry said in a statement.

Police at the scene said the assailants drove to the area on a motorcycle and detonated their explosive devices as officers deployed at a roundabout leading to the embassy approached them.

"The operation led to the death of two assailants, wounded five police and lightly injured a civilian," the interior ministry said in an initial toll. 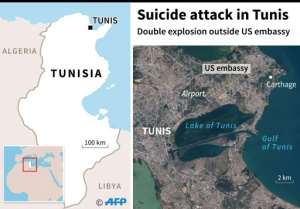 Map of central Tunis locating double explosion outside US embassy. By (AFP)

It later announced that one of the police officers, identified as Lieutenant Taoufik Mohammed El Nissaoui, had died of his injuries.

"All the security units are on high alert," the ministry said.

After the blast police dispatched reinforcements to the area, including forensic experts, as a helicopter buzzed over the Berges du Lac, a district protected round-the-clock by security forces.

"It's tough to have to go on working when your colleagues have been wounded," a police officer at the scene said.

"Our office is 300 metres (yards) from (the blast scene), but the explosion was so loud that the windows in our building shook," the 49-year-old told AFP.

"There was total panic. Some colleagues even had a fit of anxiety. We didn't know if we should stay put or leave the office," he said. 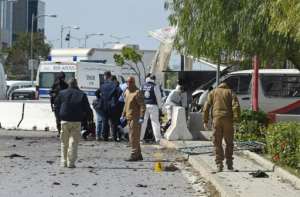 Police and forensic experts inspect the scene of a twin attack near the US embassy in Tunis. By FETHI BELAID (AFP)

Earlier police had said one of the two assailants had tried to enter the diplomatic mission but was prevented by police guarding it.

Body parts were seen strewn on the ground.

The US embassy said in a statement posted on Twitter: "Emergency personnel are responding to an explosion that occurred near the U.S. Embassy in Tunis.

"Please avoid the area and monitor local media for updates."

Tunisia faced a rise in jihadist activity after its 2011 revolution, with attacks killing dozens of security personnel, civilians and foreign tourists.

While the security situation has significantly improved since a series of deadly attacks in 2015, Tunisia has maintained a state of emergency as assaults on security forces have persisted namely in remote areas along the border with Algeria.

Before Friday the last attacks were in June 2019, when twin bombings targeted a police station on the outskirts of Tunis and a police vehicle on the capital's main throughfare.

A civilian and a policeman were killed in those attacks, while seven were wounded.

In 2018 six members of Tunisia's security forces were killed when their cars were targeted by an explosive device near the border with Algeria.

That same year an unemployed female graduate blew herself up in the busy upmarket Avenue Habib Bourguiba in central Tunis, killing herself and wounding at least 26 people, mostly police officers.

An attack at the capital's Bardo museum in March 2015 killed 21 foreign tourists and a security guard.

In June the same year, 38 foreign tourists were killed in a shooting rampage at the coastal resort of Sousse.

And in November 2015, a bomb blast on a bus in central Tunis killed 12 presidential guards.

All three attacks committed that year were claimed by the Islamic State group.