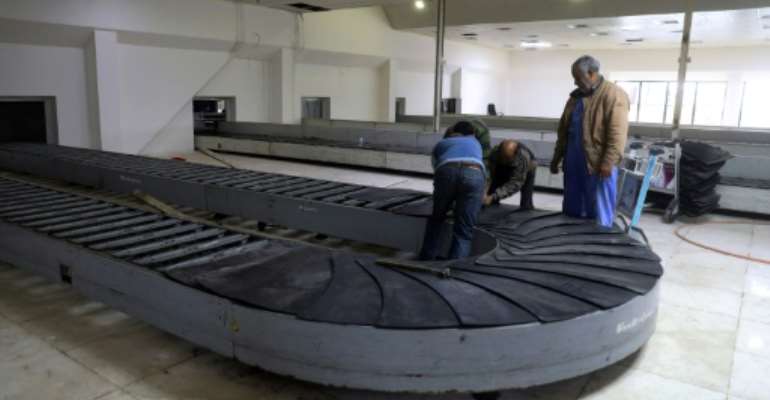 Workers at the Libyan capital's Mitiga airport. By - (AFP)

The Libyan capital's only working airport was hit by rocket fire Thursday, aviation officials said, in the latest violation of a ceasefire between warring sides vying for control of Tripoli.

Flights to and from Mitiga International Airport were suspended for more than four hours after what authorities said in a Facebook post was "continuous bombing" of the facility's perimeter.

The UN mission in Libya (UNSMIL) reported "repeated bombings over the past two days" targeting Mitiga, in a Twitter post.

The UN-recognised Government of National Accord (GNA), based in the capital, blames such strikes on forces of its rival Khalifa Haftar, an eastern strongman who launched an offensive to take the capital last April.

Pro-Haftar forces say the GNA has been using the airport for military purposes.

The two sides agreed to a ceasefire brokered by Turkey and Russia -- the former backing the GNA and the latter pro-Haftar -- that went into effect on January 12, but there have been repeated violations.

The strikes on Mitiga come a day after political talks were due to have started in Geneva, but the rival parties said they were staying away.

The talks are to run in tandem with military and economic negotiations as part of a UN-sponsored dialogue aimed at resolving the conflict.

A joint military commission wound up talks in Geneva last Sunday with a "draft ceasefire agreement" to be finalised in March, according to UNSMIL.

"These violations are taking place at the moment when Libyans are working with the UN... to put an end to the conflict and the suffering of the Libyan people, which worsens by the day," it tweeted.

The fighting since April has left more than 1,000 people dead, according to the UN.

Libya has been rocked by violence since a NATO-backed uprising in 2011 overthrew and killed the country's veteran leader Colonel Moamer Kadhafi.