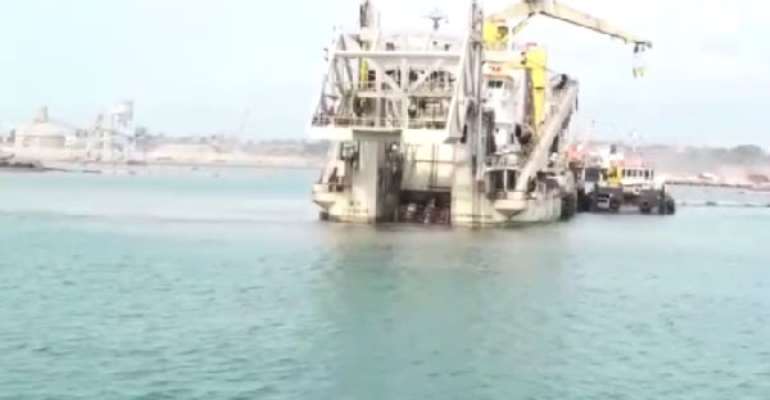 A Cutter Suction Dredger (CSD), christened 'CDS Zhen He', has been inaugurated at the Takoradi Port for dredging. When completed, it will pave the way for berthing of larger container vessels at the port.

The Ghana Port and Harbours Authority (GPHA) with its partner, IbisTek, an indigenous Ghanaian Company, jointly inaugurated the dredging works.

In 2017, the GPHA granted IbisTek a concession in the name of its subsidiary, Atlantic Terminal Services Limited, to build, operate and transfer the Takoradi Integrated Container and Multipurpose Terminal in the Port of Takoradi.

The 'CSD Zhen He' will dredge a berthing pocket to a depth of -16 metres Chart Datum, and the basin to -18.5 metres CD in the phase one of the project. They are dredging approximately one million cubic metres up to 65 Mega Pascal (MPa).

Jan De Nul, the contractor executing the project, is expected to complete work by April 2020 to allow for the commencement of quay wall for the terminal.

At the inauguration ceremony, Dr. Nana Sakyi, Chief Executive Officer (CEO) of IbisTek, said the terminal was to transform and modernize the Port of Takoradi.

“The contractor currently has almost 400 people on site; Ghanaian employees are on site now and as the project progresses the number is going to increase,” he said.

He explained that provisions had been made to enable local companies to participate fully in the project.

According to him, the whole project cost was about half a billion dollars and the first phase was about $210 million.

“Though most of the money is going to the contractor on site, they are not importing anything. So more than 60% will come to the local economy,” he added.

Kwame Gyan, Board Chairman of IbisTek, said “this is the first time an indigenous company is entering the maritime space which has largely been dominated by international players.”

According to him, the aim of IbisTek is to extend its investment to other countries after the completion of the project.

Calin Andreescu, Project Manager of Jan de Nul, said, “We entered into the contract in December last year and the contract is supposed to end in November 2021.”

The Director of the Port of Takoradi, Captain Ebenezer Afadzie, emphasized that the exercise was a critical component of the port expansion project.

“When you have more container vessels coming, they will not wait at the anchorage competing with break-bulk and bulk-carriers, which used to be the case. With the expansion, it will definitely make them come in with ease,” he said.

“When the terminal is completed, we are not going to use the old ship-spreaders and cranes again. We are looking forward to the modern ways of handling containers; that is, ship-to-shore cranes and the rest,” he added.