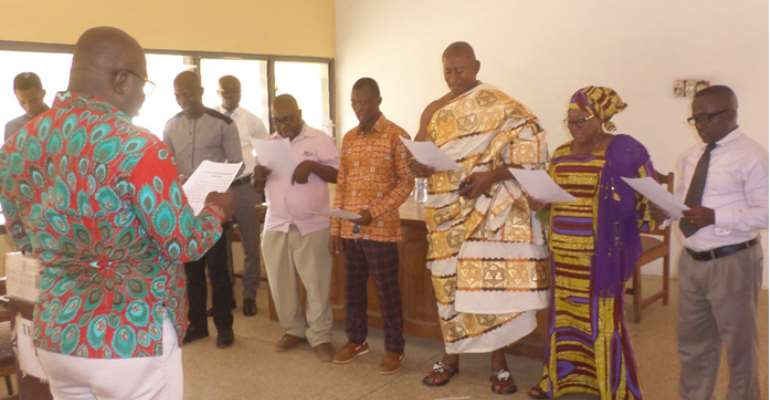 A nine-member Municipal Census Implementation Committee for the Atebubu-Amantin municipality has been inaugurated in Atebubu.

The committee chaired by the Municipal Coordinating Director Hajia Fati Saaka is tasked with overseeing a successful national population and housing census exercise in the municipality in June this year.

Inaugurating the committee, the Atebubu-Amantin Municipal Chief Executive Hon. Edward Owusu said a population and housing census is an indispensable governance tool required to ensure that good governance and democracy works for all adding that the country has a long history of population census from 1891 when the first one was conducted to the last one in 2010.

The MCE said the exercise will prove key to development planning and monitoring of policies and programs saying “it is expected that the assembly, chiefs, and people in this municipality will support every effort that the Ghana Statistical Service will make in this regard.”

“I wish to remind members of the MCIC that the success of the census in the municipality depends on the extent to which you diligently execute your task in collaboration with the four-member technical team to be assigned to the municipality”. He concluded.

The MCE administered the oaths of office and secrecy to members of the committee.

The Bono East regional statistician Mr. Richard Kumashie took the committee through the status of implementation of the census, uses and importance of census data, publicity and education strategy as well as roles and responsibilities of committee members.

Others are a representative each from both the Atebubu and Amantin traditional councils and the Information Services Department.

Nana Ofori Yeboah, Twafohene of the Atebubu traditional area who spoke on behalf of the committee assured the gathering that the committee will work hard to ensure a successful exercise in the municipality.

The height of the population and housing census under the theme ‘you count so get counted’ will be in June with the census night slated for the 28th day.

Korle-Bu Doctors Threaten To Withdraw Services Over Lack Of ...
46 minutes ago