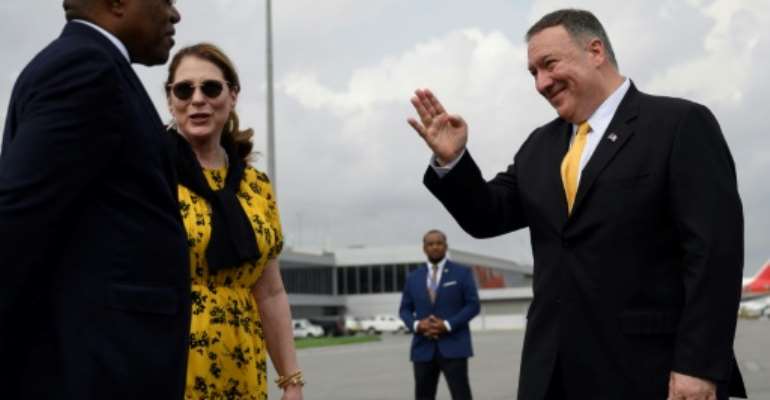 US Secretary of State, Mike Pompeo (R), and his wife, Susan Pompeo (C), travelled to Angola. By ANDREW CABALLERO-REYNOLDS (POOL/AFP)

Visiting US Secretary of State Mike Pompeo on Monday lauded Angolan President Joao Lourenco's anti-corruption drive, which has seen him pursue his predecessor's children over accusations they fleeced state coffers.

"During his first two-and-half years in office President Lourenco has done great work to make it (corruption) a ghost of the past," Pompeo told a news conference during a one-day visit to Luanda where he held talks with Lourenco.

"He has increased transparency, he has helped financial institutions clean up their books and he has pursued bad actors," he said.

"I'm optimistic that he will continue to liberate Angola from corruption."

She has denied any wrongdoing and says she is a victim of a political witch hunt.

The ex-president's family and close allies prospered during his 38-year rule which ended in 2017 when he stepped down to make way for his anointed successor Lourenco.

Pompeo said graft has "stunted this nation's vast potential for far too long", pledging US support to help the oil-rich country curb corruption.

"We want financial transactions all across the world to be clean and transparent and when we find that those aren't the case... the United States will put all its resources to bear to try and correct those wrongs.

"So we will certainly do that, to assist Angola as well."

Angola is ranked 146 out of 180 countries on Transparency International's corruption perceptions index.

Most of the country's 30 million people live in poverty, failing to benefit from the flood of dollars from crude oil and diamonds.

Pompeo said he was "encouraged" by Lourenco's efforts to privatise 195 state-owned enterprises, describing it as "a move that will greatly attract private investment".

He also said Lourenco had extended an invitation to President Donald Trump to visit the southern African country.

"I will make sure I convey that back directly to President Trump.

"I appreciate that you all would welcome a visit from President Trump, he would very much would like to get here as well. When that will happen, goodness knows, it's busy year, it's an election year," he said.

Bawumia calls for greater unity, cooperation between Muslims...
15 minutes ago