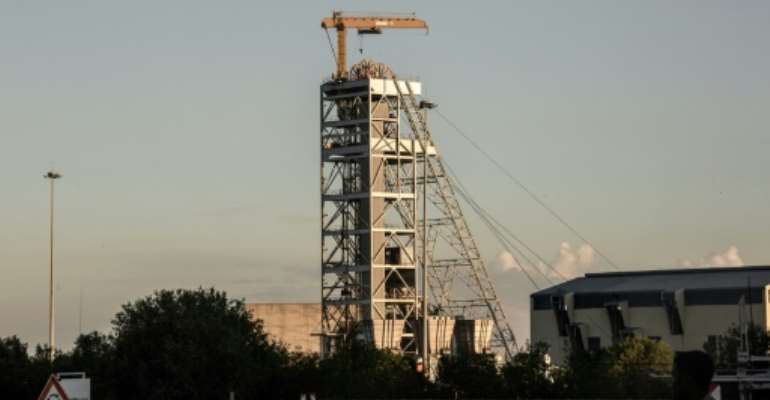 Power cuts can be dangerous for mining firms -- nearly 1,000 miners were trapped underground following a power cut at the Beatrix gold mine in February 2018. By GIANLUIGI GUERCIA (AFP)

South Africa's announcement that it will open up electricity generation to other players, effectively breaking Eskom's monopoly, has been welcomed by many, especially the mining industry, a key sector in Africa's most industrialised economy.

President Cyril Ramaphosa in his annual state of the nation address Thursday night outlined a raft of steps that will allow firms to generate electricity for their own use.

He admitted power cuts in recent months had had a debilitating effect on the economy and vowed to "rapidly and significantly" shore up electricity generation outside the debt-saddled Eskom.

The state-owned utility currently produces more than 90 percent of the country's electricity.

But it has been crippled by poorly-designed coal-fired power stations, decades of mismanagement and alleged corruption under former president Jacob Zuma. Its debts amount to 450 billion rand ($31 billion, 28 billion euros).

The mining industry -- one of the largest power consumers -- has for years been clamouring for legislative changes to ease up licensing to let firms produce their own electricity.

Signs that the government's position on the issue was shifting came at a mining conference earlier this month where it indicated the laws would be reviewed.

The Minerals Council, an association of mining firms, said it was "encouraged by the president's commitment to rapidly and significantly increase generation capacity outside of Eskom".

"The sporadic availability of power and instability of the national grid is... one of the greatest threats to the South African economy," it said.

On one of the worst days of power cuts last December, some mining firms were forced to suspend operations for at least 24 hours after Eskom implemented severe rationing.

South Africa is the continent's largest producer of gold and the world's top platinum miner.

The Minerals Council hailed Ramaphosa's undertaking to "implement measures that will fundamentally change the trajectory of energy generation in the country."

The mining industry said it will have a combined capacity to produce 1.5 gigawatts of electricity in the next 36 months.

Companies will be able to sell any excess power into the national grid.

At the mining conference, Sibanye-Stillwater mining firm chief executive Neal Froneman told AFP that previously Eskom had made it incredibly difficult for his company to get approvals to generate its own power.

"They protected their monopoly," he said.

Anglo American's CEO, Mark Cutifani, said that allowing "companies to be flexible and ...to provide energy solutions means that we can help be part of the solution. That's really positive."

The frequent power cuts meant that mining production contracted by 1.3 percent in 2019 compared to the previous year, according to official figures released on Thursday.

Mining is one of the main contributors to the economy, accounting for eight percent of GDP in 2018.

The sector is also a major employer, with more than 450,000 people on the payroll, and a critical foreign exchange earner.

Fitch Ratings said that allowing power-gobblers such as mines to build their own generation capacity "could be transformative in eroding (Eskom's) monopoly."

But, Fitch cautioned in its note, "it is still unclear whether licences will be easily obtainable."